Things to do in Amsterdam » Duinrell Holland Holiday and Amusement Park

Every year, millions of tourists pour into the Netherlands in search of different kinds of thrills. Some are interested in museums and others, they just want some adrenaline rush. For the many adrenaline junkies planning on visiting the Netherlands; “Welcome to Duinrell.”

Duinrell is just an attraction park, it is actually an amusement park in the garden of a holiday park. The holiday park has quite a lot of facilities including bungalows where visitors can stay for as long as they want. Lodging in the bungalow gives visitors direct access to all of the park’s facilities. At the park, you can also enjoy the surroundings with greenery, dunes, beach and sea. The amusement park itself has more than 40 attractions, such as roller coasters and merry-go-rounds, but also a toboggan run and wonderland. In addition, Duinrell also has a beautiful swimming pool, the Tikibad. The tiki bath has no fewer than 16 unique slides!

A day at Duinrell is definitely bound to cheer you up! Located in Wassenaar, the amusement park has more than 40 different attractions, but perhaps the park is better known for its famous Tikibad. Rick the Frog is the mascot of the park and can always be found in the park’s television commercials.

In the park, you have the choice of 40 different attractions where you can go. The speed devils can choose from various roller coasters including the famous water roller coaster the Splash. Or choose the Dragon Fly through which you race across the road between different trees. Go for the Falcon if you like loopings. Do you like to go over the head? Then go into the Waterspin, countless times you will turn upside down. Small children have fun in the ball pit, in the playground, on the carousel or in the frog roller coaster. Feel like a pirate in the rocking ship or bump into the bumper cars or crash boats. Fun for young and old guaranteed.

The most famous swimming pool in the Netherlands is located at Duinrell. The swimming pool has a slide that’s more than 1.3 kilometres long and there are also 16 different slides! There’s also the Waterpark Playa for the more younger children. In the Kids Waterpark, you can slide from one of the four water slides under the mega waterfall and above all, experience a huge amount of water fun during your time in the tiki pool.

Purchase Tiki Pool tickets with online discount for via Duinrell.com

You can also stay the night at Duinrell. Stay in one of the bungalows: Duingalows, the campsite or in one of the lodge tents. When staying in a Duingalow you have free access to the tiki bath every 2 hours and free access to the theme park every day. When you stay at the campsite you only pay € 5, – entrance fee for a 2-hour visit to the tiki bath.

Duinrell’s beautiful bungalows called Duingalows. Imagine waking up to the sound of the roller coasters in your backyard, the splashing of the Tiki Pool in the near distance and a breath of fresh air in the wonderful forest and dunes of Duinrell. Duinrell’s bungalows are perfect for couples, families with kids and even groups of friends. There is something for everyone! The large playground is open all year and the entertainment team makes sure that the kids are never bored! Catch a breath of fresh air, have a wonderful walk or bike ride in the Duinrell forest. There are many different types of Duingalows, see the options for yourself.

Discover the the several dungalow options via Duinrell.com and get online discount

The family campsite at Duinrell still remains one of the Netherlands’ most popular during the summer seasons. Duinrell is located in Wassenaar, Zuid-Holland close to cities such as Scheveningen, The Hague and Leiden. The Eurocamp campsite is only four kilometers from the Wassenaar beach. If you’re looking for a campsite in South Holland, this is the one!

The campsite offers a unique combination of beautiful greenery and entertainment for the whole family: you stay at a campsite where visitors have access to the Tiki Pool. During the summer season from April to October, guests staying at the family campsite always have access to the theme park for the entire duration of the holiday.

On this very large campsite, the flat pitches are mainly located under high trees. For tents, there are 2 fields, an open field and a nature camping field. You can also rent tents at Duinrell: there are lodge tents, mobile homes, bungalows and a hostel for groups if needed. This is a wonderful opportunity to see the South Holland countryside as well as enjoy the amusement park.

Summer is the busiest period for Duinrell. The longer the days are, the longer the amusement park stays open. Due to Duinrell being mainly aimed at children, the park logically closes relatively early all year round. The doors are opened at 10:00 AM and are closed no later than 6:00 PM. The park opens its doors every year in the month of March.

The opening and closing times are quite different during the winter. It gets dark pretty quickly and this means the park opens at 11:00 AM and closes at 16:00 PM.

Note: If you only want to use the Tiki Pool and not the amusement park, you can buy a ticket that is valid from 4 p.m.

Below is the opening and closing times for the amusement park.

Note: For guests (four years and older) who are lodging in the Duingalows, you will receive a Duinrell ID access pass via email. You are required to attach to this personal Duinrell ID, a recent passport photograph. Do not forget to print and bring this ID to Duinrell. Always carry the Duinrell ID with you during your stay at Duinrell. Show it unsolicited at the general entrance check and at the entrance to the Tiki Pool.

Purchase Your Duinrell Tickets with online discount for €17,50 via Duinrell.nl
Address, Contact Information and Route to Duinrell Holland

Duinrell Holland is located in Wassenaar, in the province of South-Holland and is 1 hour 25 minutes from Amsterdam Central station by train.

From Amsterdam Central Station by train.

There is no direct train connection with Duinrell, so visitors have to take a train to Leiden and from there, take the bus 43, direction The Hague Central Station. Get off at the “Van Oldenbarneveltweg” stop in Wassenaar and change to bus 90 in the direction of Haarlem. Get off at the Duinrell stop and walk to Duinrell in about 5 minutes.

Note: NS bus tickets can be bought on the bus and they do not include access to the park.

From Amsterdam by Car (about 30 minutes)

Take the A4 towards The Hague/Rotterdam. A44 direction Den Haag Centrum and Leiden. From here Duinrell is on the signs.

From Rotterdam by car (about 30 minutes)

Go to the A13 in the direction of The Hague. Then choose the exit Leidschendam, Den Haag-Leidschenveen, Amsterdam. Then take the exit towards Leidschendam / Wassenaar (N14). Then follow the N14 towards Wassenaar. From here Duinrell is on the signs.

Duinrell Holland On The Map

Here are some pictures of Duinrell Holland, so you can have an impression of what the amusement park looks like. 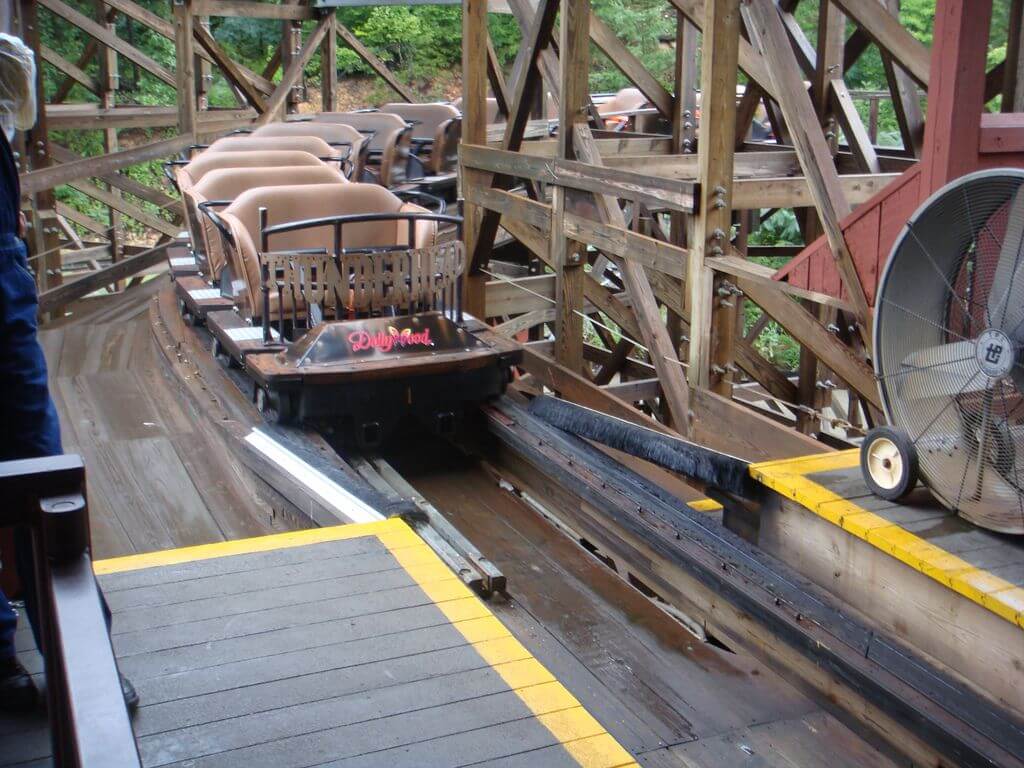 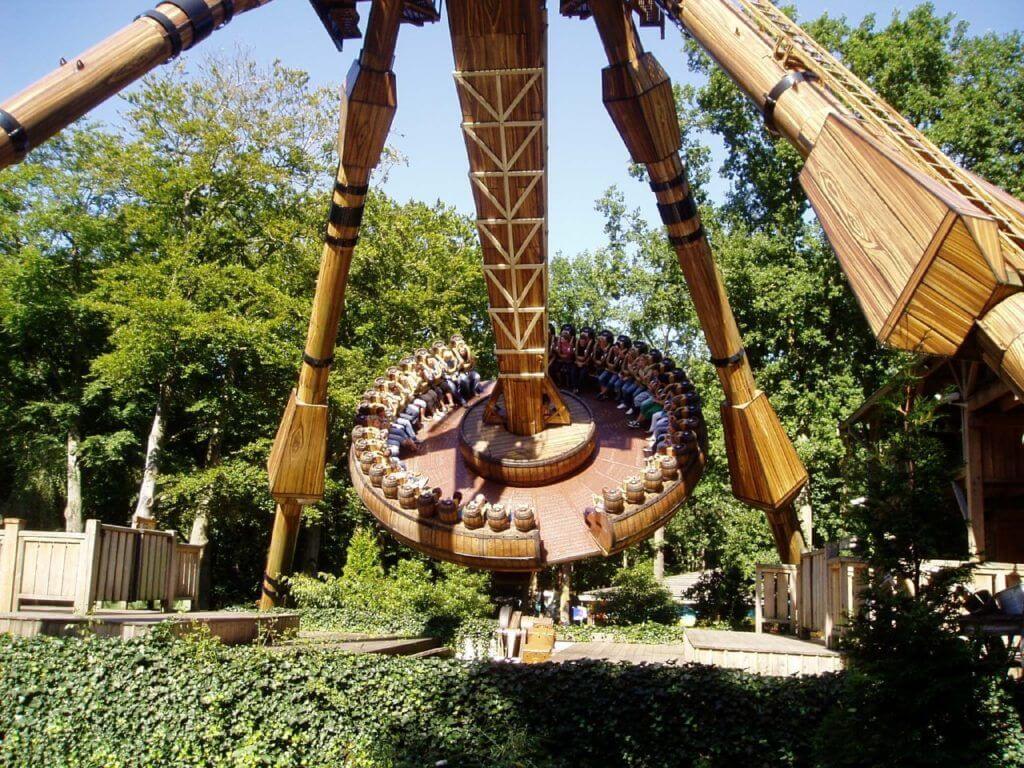 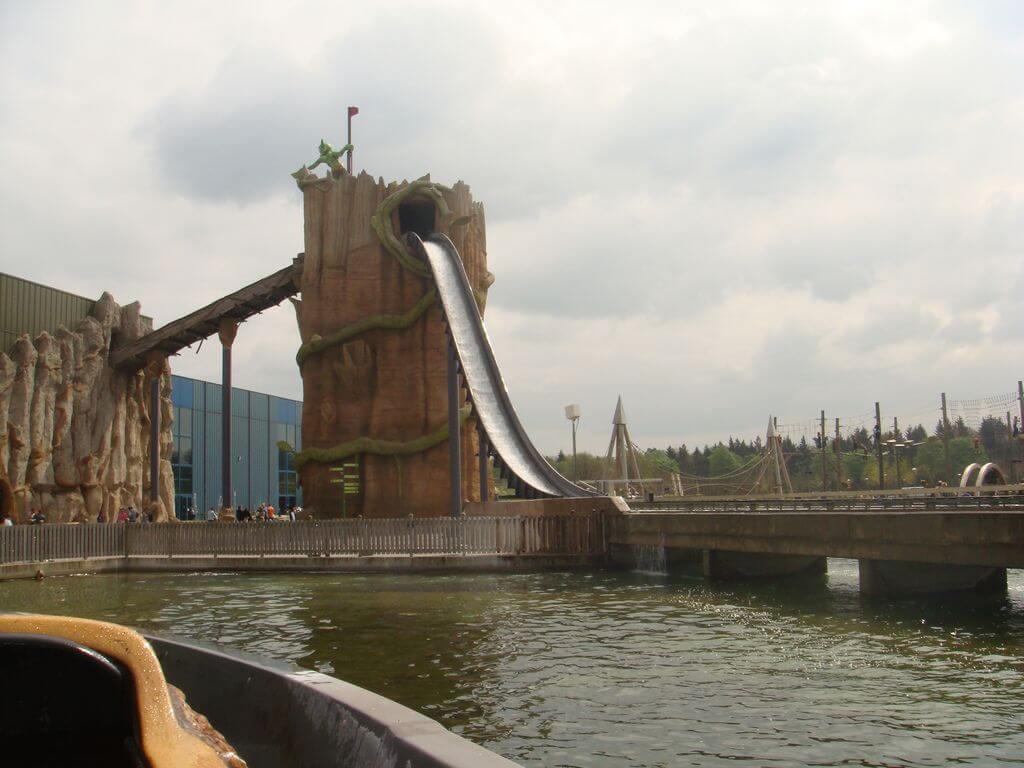 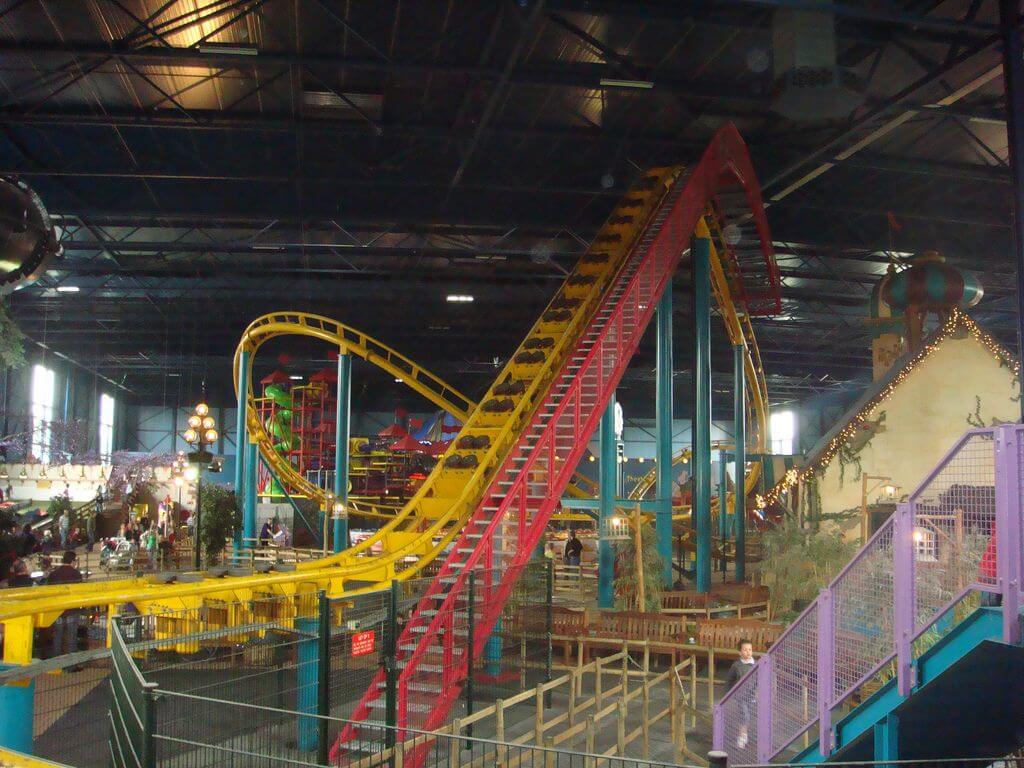 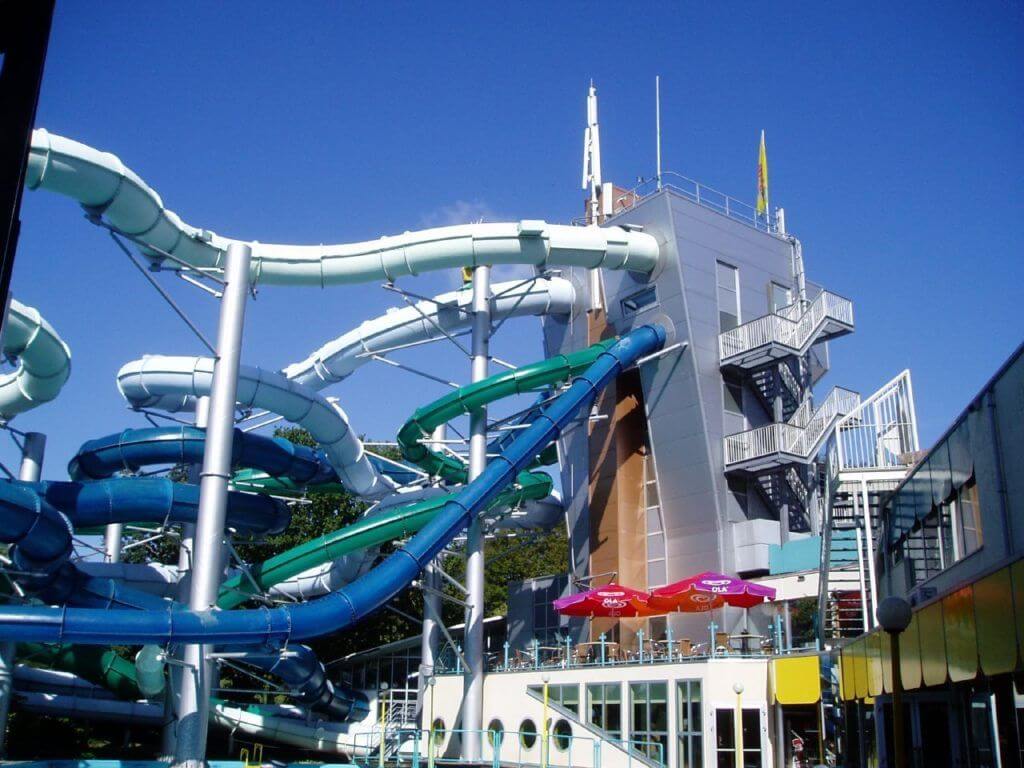 It doesn’t matter if you’re staying in the bungalows, visiting the amusement park or just the Tiki Pool, parking is free in Duinrell. Each visitor is entitled to park just one car.

Guests who are lodging in the duingalows must pick up their parking cards at the reception on arrival. You are entitled to one car card per Duingalow and this car card also grants you access to the holiday park. You can park a maximum of one car per Duingalow. If you come with several cars, report this on arrival at the Duinrell reception. You will receive an extra car card and can park the extra car on the P4 parking lot (€ 4.25 per car, per night).

Up to what age do children have free access to the amusement park and Tiki Pool?

Children up to two years have free access to the amusement park and Tiki Pool.

Are pets allowed in the park?

Pets are only allowed when you’re staying in the Duingalows. Pets are not allowed in the Tiki Pool or the attractions.

Are there requirements for the attractions?

Yes, for some attractions length, weight or age requirements apply. These requirements are indicated on the instruction boards at the relevant attraction, at the entrance of the amusement park or on the Duinrell website. View the safety rules in the theme park.

Yes, the park is wheelchair friendly and wheelchairs are also available at Duinrell! The amusement park has a limited number of wheelchairs that can be borrowed for € 1.50 for a visit to the theme park based on availability.

Do I need to print out my tickets?

Yes, we advise all our customers to print out their tickets.

Approximately in the 16th or 17th century, a Landgoed originated, under the name Landgoed Duinrell. At the castle, there were a number of buildings, including Castle Duinrell, the Oudt Duinrell farm and a few other buildings. The name Duinrell comes from the name for the drainage of groundwater from the dunes. This water is also called rell. For the fact that the estate is about 3 kilometres from the Wassenaar beach and there was also the Duin on the estate, the name Duinrell was chosen. Around 1646 this name was officially chosen for the estate and the went on to be owned by many noble families.

On 19 April 1935, Landgoed Duinrell opened its doors. With this, Duinrell was opened. The entrance to the park was then 15 cents but due to the crisis of the 1930s, the Estate was opened up to earn more money. The nature park was then not as extensive as it is now. At that time it still consisted of forests and dunes. Later, motor races were held in Duinrell from 1938 onwards. In 1937 the first watchtower came into Duinrell. In 1938 the first artificial ski slope in the Netherlands was installed at Duinrell. After WWII, Duinrell was exploited on a modest scale and in addition to recreation, the Van Zuylens also created accommodation options.

1984  saw the construction of the subtropical swimming paradise Tikibad at the existing open-air pool. In the same year, the Rodelbaan (toboggan) was opened at the edge of the park. A year later, the Kikkerachtbaan was also opened. The “castle” was demolished in 1986 and in 1989, Duinrell opened the Aqua Swing attraction, a whirligig.

In 1990 the water slide Aqua Shute was opened. Two years later the Splash was opened, an attraction where a high-altitude boat glides into the water. In 1996, the attraction Waterspin was opened. 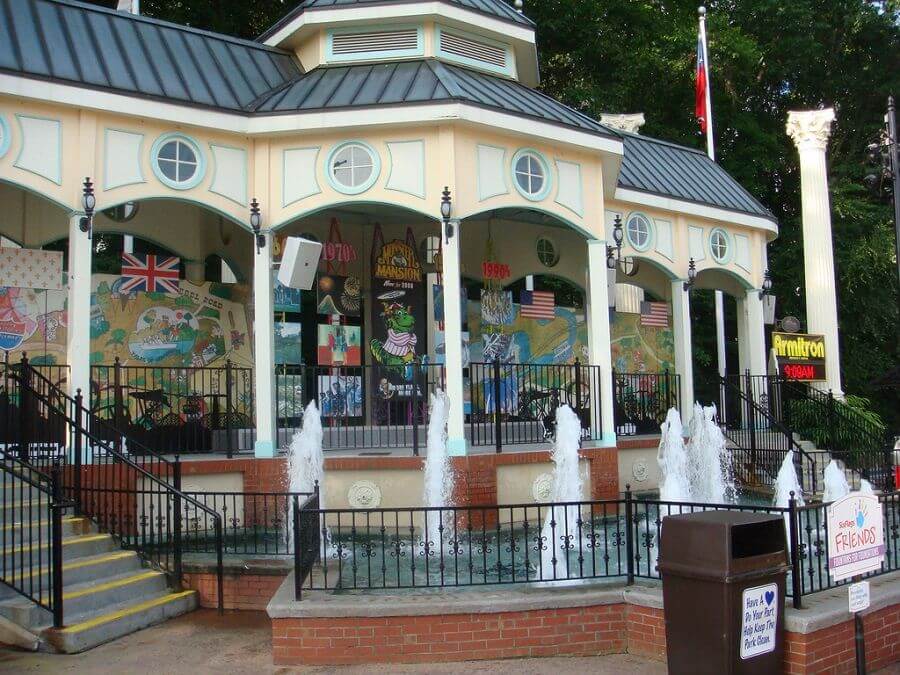 Duinrell sells several tickets, click here to see what fits the best for your needs. Or tickets for the low and high season.

We are always interested in knowing how your experience was at Duinrell. Did it live up to expectations? Did you enjoy the Tiki Pool? Were the attractions exciting? Were the staff friendly? Was it as fun as it was advertised to be? Would you recommend it to your friends and family? Please, let us know what you think in the reviews/comments section.

We selected other activities for you below, based on your visit to our page about Duinrell Holland.

Check out one of the Netherlands’ most exciting amusement parks!