– Dear visitor, please beware; Starting from May 25th, 2022, the Dutch Resistance Museum will be closed until December 1st, 2022 due to ongoing renovations as well as the renewal of the permanent exhibition – 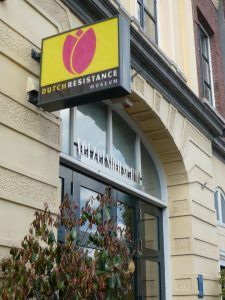 There is a lot of history to be found in Amsterdam as regards to the Second World War and one of the places where that information can be found in is the Dutch Resistance Museum Amsterdam.

It is common knowledge that the Netherlands was occupied by Nazi Germany from the 14th of May 1940 to the 5th of May 1945 and that almost every Dutch person was affected by the consequences of this forceful occupation.

Known locally as ‘De Verzetsmuseum’, the Dutch Resistance Museum Amsterdam sheds light on those who took up resistance. Resistance in that period of time had many forms. From forging of documents to espionage, helping people go into hiding (like in the case of Anne Frank), underground newspapers to keep the populace informed and even finding escape routes. The museum documents a variety of these activities in a thoughtful and moving way. They show the resistance of the Dutch to the Nazis with the use of pictures, films and artifacts.

The exhibition takes visitors into the past – to the World War II period. It tells a story in chronological order from approximately 1930 to 1950. The information is offered in various ‘layers’ as visitors are presented with an overall picture of a rather quiet Dutch society in the thirties, experience the sudden and unexpected German invasion. They gradually begin to discover both the oppression and resistance intensify as the years go by.

The exhibition shows streets and walls full of photos as this helps with bringing the climate of the war years to life. The authentic objects, photos and documents, films and sound fragments, tell the history of people who lived through that period – what they endured, how they suffered and most importantly, how they resisted.

Information in the museum is presented in both Dutch and English, although there is a possibility for visitors to get audio guides (available in Dutch, English, German, French and Spanish) for more in-depth information. The museum’s staff are also always happy to share stories and give extra information to visitors.

– Dear visitor, please beware; Starting from May 25th, 2022, the Dutch Resistance Museum will be closed until December 1st, 2022 due to ongoing renovations as well as the renewal of the permanent exhibition –

The Resistance Museums is open daily throughout the year, except on the 1st of January, 27th of April and 25th of December.

Note: Free entrance for children under 6 and visitors with the I AMSTERDAM CITY CARD.

From the date of purchase, an e-ticket is valid for six months.

They accept both printed and digital tickets. If you’re not able to print your ticket, no problem! Just bring your smartphone or tablet with you to the museum. Naturally, check the battery is sufficiently charged.

If you would like to visit with a school or a group of 10 people or more, please contact group bookings at 00 31 20 6202535 / groepsbezoek@verzetsmuseum.org.

Address, Contact Information and Route to the Resistance Museum

The Plancius building is situated in the Plantage district, a developing ‘museum district’ near the Jewish Historical Museum, the Maritime Museum, the Netherlands’ largest science centre Nemo and the ethnographic Tropenmuseum.
The entrance of the museum is opposite the zoo.

The Resistance Museum is also 30 – 32 minutes walk from the Anne Frank’s House.

You can also check out the Hop On – Hop Off City Sightseeing buses and boats on this link: https://thingstodoinamsterdam.com/hop-on-hop-off-bus-boat-amsterdam/

Buy your tickets and hop on the buses and the boats.

Note: Stop 4 of the Hop On – Hop Off City Sightseeing bus is very close to the Resistance Museum.

We are always interested to find out about our visitors' experiences. Please leave your Dutch Resistance Museum Amsterdam reviews below and help fellow travellers! What did you think of the Resistance Museum? Would you recommend it to friends? Did you have to wait long at the entrance? Include all you want in your review. Please be patient as we check all reviews by hand, it will be posted soon!

Front desk staff , 3 men, were rude and unhelpful from the very start, and patronising when we needed assistance with the audio guide. I did not feel welcome at this museum. A bit repetitive at the start, allow more time towards the end as the exhibits are more interesting.

Really interesting museum, with lots of untold stories if you ask me

Very interesting and emotional experience. Well worth a visit. However, although we visited at 10.00 a.m. and not very busy, was spoilt by party of students laughing, and shouting to each other as though in Disneyland! This was so disrespectful to the memory of all those people who suffered during this dreadful time, and also to the families who might have been visiting the museum. Also, it meant we could not hear audio tapes properly due to their shouting. Mentioned it to staff on way out who said it was responsibility of teachers. Suggest appropriately worded signs displayed and staff take action if necessary.