The Jewish Cultural Quarter is an area of Amsterdam that aims to preserve and showcase the history and culture of Jewish heritage. The buildings that are open here give a unique and, at times, sentimental look into the past, present, and future of the Jewish religion.

The Jewish Historical Museum prides itself in being the only museum in the Netherlands that focuses solely on Judaism. Following the museum’s forced closure after World War II, the museum was renovated in 1987 and moved into its present location, an area that was formerly made up of four synagogues. Visitors of the collection can see the influences that both Jewish and Dutch culture had on its people and artifacts. Exhibitions include photography, art, and music – all created by Jewish artists! 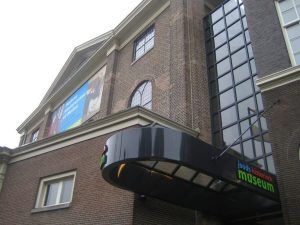 At the JHM Children’s Museum, visitors can visit the home of the Hollander family, a fictional embodiment of the Jewish culture. In each room of the “house,” guests can see what it means to be Jewish in Europe, the traditions each family member brings outside of the home, and the culture in which they are apart of. The underlying value in the Children’s Museum is peace and hope both throughout the world and in the home.

Constructed in the 17th century, Portuguese Synagogue is a place of worship that is still used as such today, nearly 400 years after it was first built. The Jewish-Portuguese population fled to the Netherlands, where Judaism was acknowledged and thriving in Amsterdam. Here, they were granted a place to practice their faith. Connected to this is the Et Haims Library, the oldest library in the world to focus on Judaism. Today, much like before, all travelers can enter and enjoy this historical building.

Guests can also tour the Hollandsche Schouwburg. Here, visitors are allowed to walk through this former theater, which was used as a deportation point for Jewish individuals during World War II. Today, the building is a memorial for the lives lost during this time in its aim to build hope and resistance throughout the Jewish community. Groups or individuals can also request a private guided tour of the theater for an additional fee.

Visitors can also grab a bite to eat at The Museum Cafe, the only restaurant that prepares and serves kosher food in the city center. Even if you do not typically practice kosher eating habits, the cafe allows a tasty glimpse into the Jewish culture.

All locations are open 7 days a week except on certain public Dutch and Jewish holidays. Check the museum’s information desk for a complete overview.

You can enjoy all of the museums in the Jewish Cultural Quarter with one ticket!

We are always interested to hear about our visitors' experiences. Please leave your museum review below and help fellow travelers! What did you think of the museum? Or the entire cultural quarter in as a whole? Would you recommend it to friends? Did you have to wait long at any entrances? Include all you want in your review. Please be patient as we check all reviews by hand and know that it will be posted soon!

Explore the wonders of human sexuality at this memorable museum!