The Portuguese Synagogue is an important part of the Jewish Cultural Quarter in Amsterdam. During the Dutch Golden Age in the 16th and 17th centuries, Jewish men and women wished to escape persecution in areas like Spain, Portugal, and Eastern Europe. In the Netherlands’ thriving Jewish community, families could finally feel at peace. These individuals called themselves Portuguese Jews in order to set themselves apart from Spain, which was a great enemy to the Dutch during this time.

The Synagogue was built by the Dutch government as a place of refuge. The building still stands today, nearly 400 years after it was first constructed. It is still used as a place of worship, with services held every week that are open to the public. If visitors do not practice the religion, they can still explore the grounds and the beautiful architecture inside when there is no service.

Located on the grounds is the Ets Haim Library, which prides itself on being the oldest Jewish library in the world. Translated as the “Tree of Life” in Hebrew, Ets Haim began as — and still is — an important link between those of the Jewish faith and their history.

Today, visitors can explore these cultural landmarks, as well as the other museums in the Jewish Cultural Quarter. By clicking the Tours and Tickets button below, you can visit all of the museums with just one ticket!

Order your tickets for the Jewish Cultural Quarter (includes Portuguese Synagogue) for €16,- at Tours and Tickets

The synagogue is closed to the public on Saturdays. Note that the opening hours change by month, but the times below

are consistent. Be sure to visit the location for updated hours. 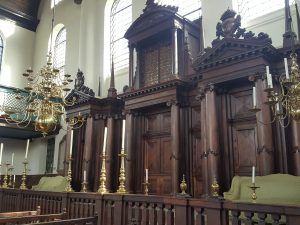 You only need one ticket to visit all of the museums in the Jewish Cultural Quarter.

Order your tickets for the Jewish Cultural Quarter (includes Portuguese Synagogue) for €16,- at Tours and Tickets
Order your tickets with discount code here for €18,75 at Tiqets.com
Address and Contact Information

Like nearly all places of interest in Amsterdam, the Portuguese Synagogue is easy to get to using public transportation or on foot! See below to find out different ways to get to the Jewish Cultural Quarter from the Central Station.

With the widget below, you can find real-time travel times based on your current location. This application will help you when you are not sure which bus or tram to take in the city!

Portuguese Synagogue on the City Map

We are always interested to find out about our visitors experiences. Please leave your Portuguese Synagogue or Ets Haim review below and help fellow travelers! What did you think of the Synagogue? Would you recommend it to friends? Did you have to wait long at the entrance? Include all you want in your review. Please be patient as we check all reviews by hand and know it will be posted soon!