The main Amsterdam airport is ‘Amsterdam Schiphol’ (IATA airport code AMS). The airport is situated just outside the city in the south, between Amsterdam and Hoofddorp. From the airport, it’s a twenty-minute drive to the city center. The airport is in the top five busiest airports in Europe. With six runways it handles over 55 million passengers per year. From the airport of Amsterdam, there are daily flights to almost all major airports worldwide. A wide variety of airlines fly to/from Amsterdam Schiphol airport, including the low-cost airlines.

Check out cheap flights from and to Amsterdam Schiphol Airport at Skyskanner.net

Amsterdam Airport is a spacious, modern airport with all required facilities. There are many shops, restaurants, and bars where one can spend some time while waiting for departure. As from the end of March 2016, the renewed ‘Holland Boulevard’ after customs will house two collections of both the Rijksmuseum and NEMO Science Centre. 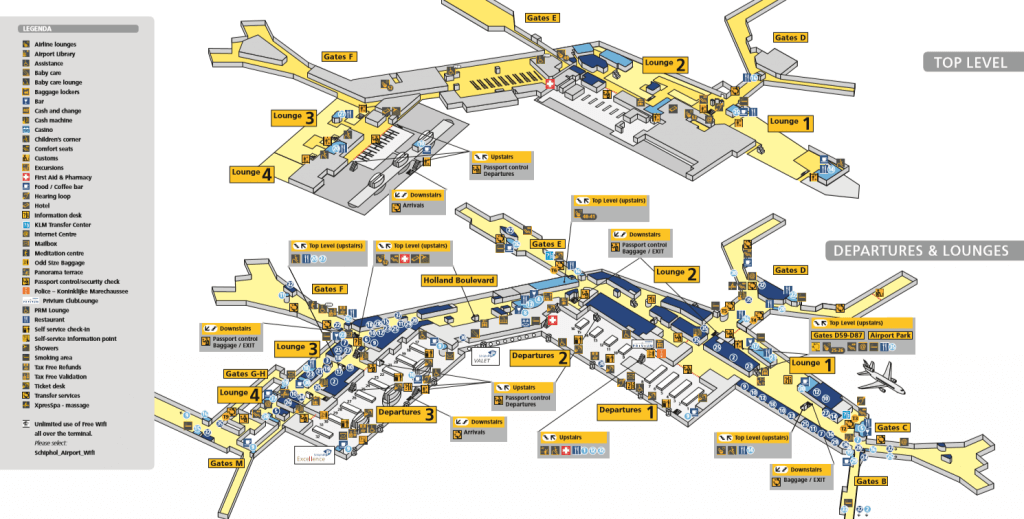 Getting to/from Amsterdam Airport
Check out cheap flights from and to Amsterdam Schiphol Airport at Skyskanner.net

Schiphol airport is only twenty minutes away from the city centre. There is a flawless connection with public transport as there’s a train station beneath the airport. Beside the train one can also take a bus to the centre. Do you prefer some more luxury or privacy? There are plenty of taxis waiting for you just outside the airport.

Taxis from and to Schiphol Airport

There plenty of taxis available from the main hall at Schiphol airport. The taxi ride takes, just like the bus, approximately 25 minutes depending on where you need to be in the city. The airport strongly recommends to ignore people offering taxi services standing in the arrivals hall, to avoid getting scammed. We recommend using ViaVan, a mobile app and on-demand taxi service. With ViaVan, you can choose between a shared or private taxi ride and the rate for would be somewhere around €20-30. Secondly, if you prefer not to use an app, you can also approach one of the taxi’s waiting outside. However, the rates will around €50-60. A taxi from Amsterdam to the airport should never cost over €80,-. If you feel you are being scammed call the police!

Trains to and from Schiphol

As there is a train station just under the arrivals, the train might be the most convenient option to get to Amsterdam. The train ride to Amsterdam central station takes about 15 minutes. There is a frequent connection to Amsterdam Central station. In daytime there are trains departing to Central Station every few minutes. In night time there’s just one train per hour, so this might require some more planning. Do keep in mind that during night time the connections from Central Station to other parts of the city might not be available. Therefore please check our widget to find out first.

There are few options in buying train tickets that have their own advantages and disadvantages. Check out the following options to see which one suits you best, as this can save you lots of money!

Please be aware that whatever option you choose you should always check in when getting on transport and check out when exiting. This is done by holding your ticket against one of check-in poles or at the gates to the railway.

Get your Airport Express: Return Trip to the City Center for €11,25 via Getyourguide.com

There’s a frequent bus connection between Amsterdam Schiphol Airport and the centre of Amsterdam. The bus stops in front of the main hall of the airport called Schiphol Plaza. The bus service is bus number 197 called “Amsterdam Airport Express”. Between 5:00 a.m. and 0:20 a.m. the airport express bus departs every 10 to 15 minutes. In the night time after 0:20 a.m. till 5:00 a.m. the 197 Amsterdam Airport Express is replaced by the “N97 Niteline” which drives hourly.

The bus drive takes approximately 25 minutes depending on witch stop you need. The bus stops at the following stops in Amsterdam:

Not sure which stop you need? Contact your hotel or use the widget below.

As for most parking facilities near airports, parking is quite expensive. Though there are several options available; the airport has its own parking facilities but there are also companies within the airport area where you can park. Parking at one of these companies is often cheaper. They can either pick up your car from the airport as you get on your flight or they offer a free shuttle service from their parking lot to the airport. Check out the following options to see which suits you best:

Get your Airport Express: Return Trip to the City Center for €11,25 via Getyourguide.com
Amsterdam Airport shopping

Stopovers are rarely enjoyable. For those who have a stopover at Amsterdam airport, there’s the advantage the city of Amsterdam can be reached in no time. A bus trip or train ride to the center of Amsterdam will take under 30 minutes. Does your stopover doesn’t allow enough time to go into the city? Then you’ll have to spend some time at the airport. Luckily the airport offers plenty of facilities to make your time as comfortable as possible. If you’re looking to waste some time at Amsterdam Airport, go and check out the shopping areas behind customs!

The departure lounges of Schiphol airport are divided into 4 different lounges. Lounge 2 and 3 are connected lounges for intercontinental flights and have the most extensive shopping areas. Lounge 1 is meant for European flights and also offers a fair share of shops, restaurants, and bars. If you’re traveling through lounge 4 however, you’ll find a minimum amount of shops and bars. Lounge 4 is mainly used by low-cost airlines such as Ryan Air and Easyjet. We recommend not to go through customs at lounge 4 until necessary, because of the limited facilities.

So you have some time to spend at Amsterdam Airport? Let’s do some shopping before flying! Schiphol Airport offers a wide variety of shops and bars after customs. You’ll find a variety of shops offering products like electronics, cosmetics, jewelry and valuables, tobacco and liquor and of course Dutch specialties such as Dutch Cheese, flowers, and Herring. Luxury shoppers can eat their heart out at one of the many brand stores, such as:

Looking into buying something from the ‘See Buy Fly shops’? Hold up a second! We’ve got a €5,- discount voucher for all expenses above €25,-. All you have to do is fill out a form on the website of See Buy Fly and you’ll receive the discount voucher in your email within 5 minutes.

Finding a ticket to Amsterdam shouldn’t be a difficult task as Amsterdam Schiphol is a big airport. There are flights to practically any desired destination by both premium and low-cost airlines. As for any flight, it’s wise not to wait too long with booking as the fares go up coming closer to the departure date. Please keep in mind the following tips when booking a flight to Amsterdam:

Check out cheap flights from and to Amsterdam Schiphol Airport at Skyskanner.net

In order to find the best tickets to Amsterdam or one of the other airports, we recommend Skyscanner. We have been using Skyscanner a lot, and we found that they offer a complete price comparison including most airlines and ticket resellers.

Finding the cheapest flight to Amsterdam

If your focus is to get to Amsterdam for as cheap as possible you might want to take notice of the following tips to find the cheapest tickets:

Want to inform other travelers about your experience at Amsterdam Airport? Leave your review below! How was the service? Were there long queues for customs? What did you think of the airport facilities? Were there enough seats? Did you feel safe? Post a review below and it will be posted after manual revision!

Thank you very much

Thank you very much for the information provided, the video is very informative.

Check out how to get around in Amsterdam by public transport

Check out how to find a hotel that suits your needs!

Get Train tickets from Schiphol to Amsterdam - safe yourself a hassle
Share:
Share:
We use cookies to ensure that we give you the best experience on our website. If you continue to use this site we will assume that you are happy with it.Agree