The Johan Cruijff ArenA (better known as the Amsterdam ArenA) is the home base of AFC Ajax (Amsterdam Football club Ajax), which is by far the most popular football club in the Netherlands. Most of the people know the Amsterdam ArenA, because of Ajax. Ajax was founded in 1900. It is located in South East suburb of Amsterdam. Besides football, the Amsterdam ArenA has much more to offer! To get a quick impression, take a look at the summary below. Especially the ArenA Tour (in English and Dutch) is popular among tourists. In addition, most tourist visit Amsterdam during summer. In this period there less matches played.

Things to do at Amsterdam ArenA: 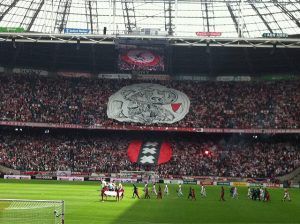 Some facts
In Dutch you would pronounce it as ‘a jaks. Ajax has a very impressive history for a football club of a small country like the Netherlands (+/- 17 million citizens). For instance, they have won 2 times the inter Continental Cup (World Cup), 4 times the UEFA Champions League, once the UEFA Europa League, 33 times the Eredivisie of the Netherlands and much more!
Lastly, Ajax is well-known associated with Johan Cruyff. He had his break through at Ajax and after his football carrier he was for a long time an active member in the board of Ajax.

Drone footage of the Amsterdam ArenA

The ArenA Tour is available most days of the year. The Schedule bellow provides you the most up to date starting/ departure times. Take a closer look at the schedule, because there are a few expectations. These are marked with a single or double star.

Note: All the tours departure at the main entrance. A single tour takes around 70 minutes.

Tickets to for the Amsterdam ArenA tour can either be acquired from the main entrance or online. We recommend you to pre-order your tickets, as the online tickets are cheaper. This will save you € 2,- per adult ticket and €1,50 per child ticket. Keep in mind that during the national holidays the waiting time can be even longer. The tours start every other hour. Take a look at the opening times above for the most up to date departure times. Lastly, you don’t have to print your ticket, just show it at the counter on any mobile device.

Note: cash payments are not accepted at the counter. You have to purchase your tickets online or via credit- or debit card.

Regular tour prices at the counter

If you order your tickets via our ticket partners you’ll receive a nice discount on each ticket. We also regularly have exclusive discount codes that grant even more discount, so be smart and buy your tickets online! The tickets will be sent to your phone instantly and there’s no need for printing!

– Sorry, at the moment, no discount code available –

Address, contact information and route to the Amsterdam ArenA

Address, contact information and route to the Amsterdam ArenA

The ArenA is located in South East suburb of Amsterdam. There are several ways by public transport to get at the ArenA. Also when you go by car you can you use the freeway A2 from Amsterdam. As well you go from Amsterdam via the urban area roads. With the map in the accordion below you can navigate yourself to your destination. In addition, the accordion with the public transport headers, plans your trip completely. Just tell the application from which point you departure.

Amsterdam ArenA on the map

The ArenA is located Amsterdam South East in the suburb of the city. Nevertheless it’s very easy to get there, when you departure from Amsterdam. Depending from where you departure, there are many possibilities to get to the Amsterdam ArenA. For instance, you can go by bus, metro or train. When you arrive you will see recognize the ArenA immediately. It will take 5 to 10 minutes by foot the get there. Below you find most of the public transport options you can take to the ArenA:

For all the other depature places, just use the public transport widget below, to see the prices and time of departure when you arrive. This application is based on your current location, and provides support for the buss, metro, and train.

Reviews of the Amsterdam ArenA

We are always interested to find out about our visitors experiences. Please Let us know what you thought of the Amsterdam ArenA and help fellow travelers! In this case our opinion is not objective. Since Ajax is the best football club of the Netherlands!

Also, check out the other things to do in Amsterdam:

Find a place to stay in one of the great hotels of Amsterdam. The overview shows you all the different options in prices.

Experience Amsterdam from the water, and make a canal cruise through this romantic city.