Best things to do in Delft

Delft is more than 750 years old. It is a mid-sized city in the west of the Netherlands. It’s a beautiful, unspoiled town with traditional architecture, old museums and canals. It’s also home to the world-famous blue and white ceramics. Delft makes a great destination for a day-trip or can serve as a base to explore the region. And if the bustling crowds of Amsterdam are not really your thing, Delft is a lovely alternative, offering an equally interesting insight into the cultural wealth of old “Holland”, on a far more intimate scale. Its name is derived from ‘delven’ which means delve or digging. Delft’s oldest canal is called The Old Delft (de Oude Delft). Delft expanded around it; later on, many other city-canals were dug as lifelines through the city. These canals (grachten) are still the pride of Delft.

Delft has long been a centre of art and science. With the foundation of the VOC (Dutch East India Company) in 1602, Delft also became a trading centre. The VOC was at one time the largest trading company in the world, with a huge fleet and offices all over Asia. One of the Dutch offices was in Delft. 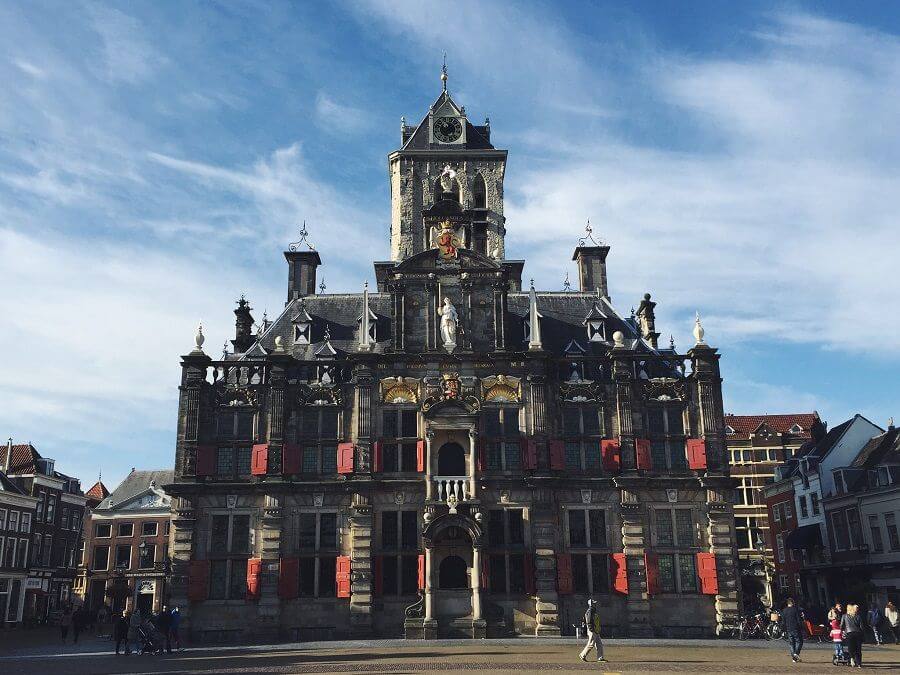 What to see in Delft?

Delft is a very old city and there are definitely lots of things to see. Of course, you can always do a canal cruise or just walk around the city and see the sights. There’s also the possibility of talking to the locals as most of them tend to have more information on the history of the city. Renting a bike and riding around the city is advised. The use of a bike makes it easier to get to all interesting spots because some streets are quite narrow. 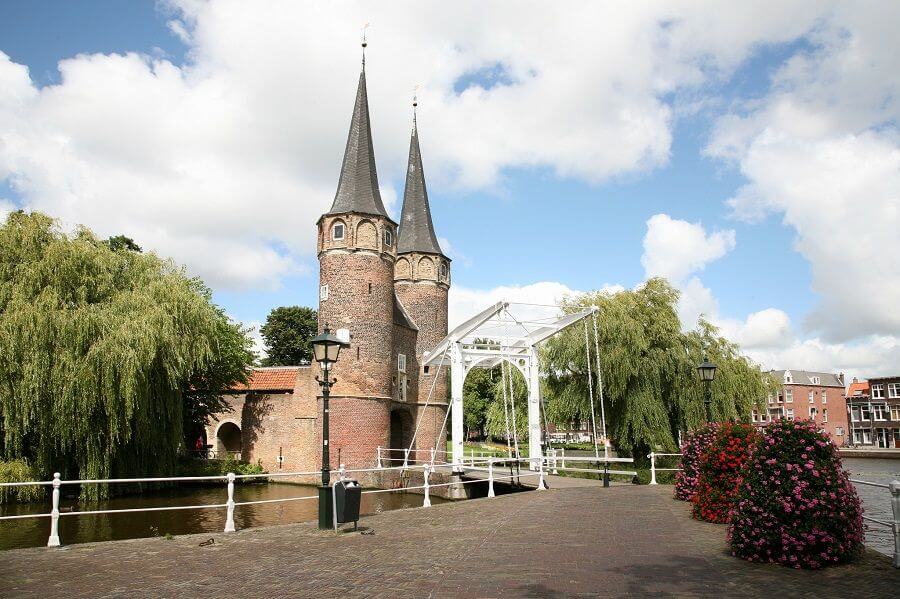 Located on the Delft Market Square, the Nieuwe Kerk is a Protestant church which was built in 1496. A popular tourist attraction in Delft and known for being the royal burial chamber, although this section of the church isn’t accessible. Prince William the Silent was the first to be buried here, and ever since, the members of the House of Oranje-Nassau have been buried there. The latest to be buried in the church are Queen Juliana and her husband Prince Bernhard. One fun thing you can do is climb the 108,75 m tower to get an impressive view of Delft and surroundings. It’s the second highest church tower, after the Domtoren church of Utrecht.

Often called “Oude Jan” (Old John), the Oude Kerk is Delft’s oldest church and was built in 1246. Founded as St. Bartholomew’s Church in 1246, the Old Church is one of the Netherlands’ most beautiful churches with a magnificent interior to match. Known to be the final resting place of a lot of famous Dutchmen like Piet Hein, Maerten Tromp and Johannes Vermeer, the church is home to some old Protestant relics that’s definitely worth seeing. The most massive bell in the tower (cast in 1570) called Trinitasklok, weighs nearly nine tonnes. Due to its powerful and almost damaging vibrations, the bell is only rung during disasters or during the burial of a member of the royal family. 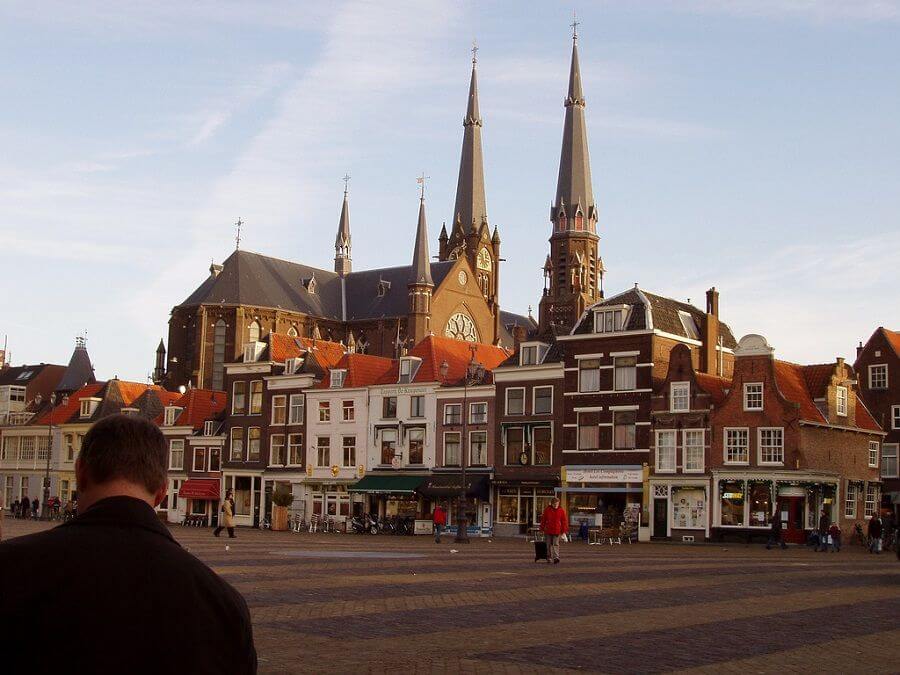 It is not possible to visit Delft and not paying a visit to the Royal Delft Experience. Of the 32 earthenware factories that were established in the 17th century after the VOC brought back the first porcelain wares from China, this is the only one remaining. It is definitely worth a visit because it has been around for more than 350 years. Imagine the history! It is possible to visit the factory or to participate in a workshop. The Royal Delft earthenware factory also features a museum & guided tours.

Watch the talented craftsmen at work and see how they do the painting of the earthenwares. Do you know that the Delft Blue (Delfts blauw) earthenware is actually painted in black? It only turns blue when fired!

Order your tickets and find out more about the Royal Delft Blue.

Note: Tickets come with an audio guide and cancellations are not possible!

Order your Royal Delft Experience tickets for €10,5,- at Tiqets.com

This is definitely one you’d want to visit. The Prinsenhof in Delft is a former monastery that served as a palace for William the Silent. Now an urban palace and houses a municipal museum which was established in 1911, it was in this same building that William the Silent was murdered in 1584. Nowadays the museum displays some Golden Age Dutch paintings.

Designed by Henrik de Keyser after the first one was destroyed by a fire in 1618, Delft’s City Hall is a magnificent work of art and an excellent piece of architecture. Although the City Hall has changed over the years, it was finally restored to its former glory at the end of the 19th century. There are some old works of art in the town hall and a walk around reveals a lot about the way the Dutch used to live. Nowadays, it’s the ideal venue for civic weddings and tourists who love Dutch architecture and history.

You can also visit the Delft Historic Museum and see tools and other wares used for packaging cigars, cigarettes, snuff, chewing tobacco and pipe tobacco. The museum is located in the old cigar shop of the firm ‘t Mannetje started by Rein and Nel ‘t Mannetje.

The Vermeer Center is an information centre dedicated to the Dutch painter Johannes Vermeer and his contemporaries. The centre works with local archaeologists and other heritage organisations to disseminate information about the city of Delft during the lifetime of Vermeer. The centre is home to an exquisite reproduction of all of his 37 works in chronological order. Also, witness his working methods and learn as much as you can about the man and his paintings.

Don’t forget to order your tickets with the blue button below!

Order your Vermeer centrum Delft for €9,- at Tiqets.com
What to do?

What to do in Delft?

Built in the year 1862 as a temple, the Delft Synagogue houses a permanent exhibition to the remembrance of the Jewish victims in the Second World War. The Synagogue, which was sold to the Delf municipality in 1952 and renovated in 1974, now serves as a cultural quarter that hosts cultural activities.

2. Go for a canal cruise from Delft to The Hague

Just like Amsterdam, Delft has some really beautiful canals. Join a canal cruise from Delft to The Hague and discover Dutch history like never before. See the historical buildings and the beautiful green countrysides. The boats are comfortable and tourists get to have a short stop at Huygens’ Hofwijk and experience the 17th century through the eyes of Constantijn Huygens, a Dutch poet and composer.

Buy your tickets here via the blue button and see Delft from the canals.

Order your boat tour Delft to the Hague tickets for €12,- at Tiqets.com

Note: Tourists will have to make their own way back to Delft via the Tram 1. Cancellations are possible up to 24 hours before your visit. This product is also seasonal and is only available in the summer months. 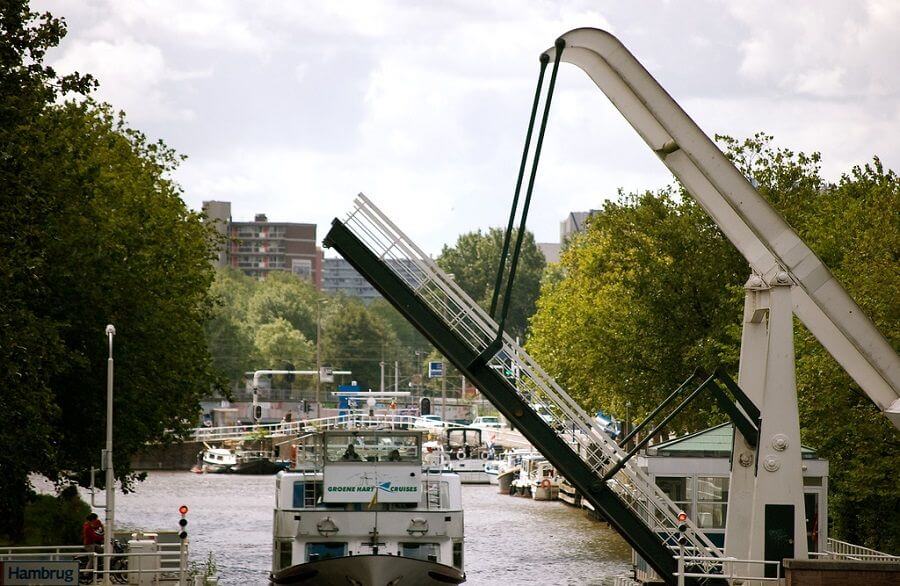 The Botanical Garden of the TU Delft is one of the Netherlands’ oldest gardens and definitely an oasis of peace. Take a walk through the garden while marvelling at all of its beauty and history.

4. Rent a bike and discover the city

Rent a bike and visit De Delftse Hout, a park/leisure area to the east of Delft. Cycle through the woods, have a picnic, walk through the parks and enjoy the scenery.

5. Have something to eat and drink on one of the terraces

If the weather allows it, enjoy one of the terraces in Weesp. Enjoy a drink and maybe try a Dutch Croquette or some other typical Dutch snack. There are lots of terraces with open air catering during the summer months. Sit on any of these terraces and enjoy the scenery.

A visit to Delft isn’t complete without visiting any of her markets. The bric à brac Markets around the central streets (Hippolytusbuurt, Vrouw Jutteland and Voldersgracht) is always a good option. Thursday is market day in Delft. There are about 150 stalls between City Hall and Nieuwe Kerk. On Saturdays, the location hosts a smaller version of the general market with some 50 stalls. There is also the Fower Market. This market can be found on the Brabantse Turfmarkt, a five-minute walk from the general market.

Climb Nieuwe Kerk (New Church) tower. The Hague, Rotterdam and Leiden can be seen from the top. On clear days even Utrecht and Amsterdam can be visible. Wouldn’t that be fun?

The Delft fish market is one of the oldest in the world. Try a traditional Dutch herring. The taste holds between raw tuna and “gravlax” (Nordic salmon cured in salt, sugar and dill).

Open on Thursdays and Saturdays, the antique market attracts tourists from April through October. On Thursdays it is located along the canal in the street known as Hippolytusbuurt. On Saturdays the market is bigger and includes a book market.

Delft on the map and how to get there

From Amsterdam Central Station, there’s a regular connection with Delft. The train departs every 15 minutes. Hop on the train going to The Hague usually makes stops at cities like Leiden and from there you can take another train going to The Hague. The train makes a brief stop at The Hague before making a final stop at Delft. It’s a 57-minute train ride and costs approximately €13,20- for a one-way journey.

For travellers who wouldn’t like to travel with a transfer, the train going to Rotterdam also makes a stop at Delft. It goes straight from Amsterdam to Delft while making a few stops at Haarlem, Leiden and The Hague.

There is s direct connection from Amsterdam Schiphol Airport to Delft. The train going to Rotterdam departs every 20 minutes and makes stops in cities like Leiden and The Hague, before making a final stop in Delft. It is a 38-minute train ride.

Delft is easily reached by car. Coming from Amsterdam or Schiphol, it is at the end of the A4 motorway; coming from Rotterdam, Delft has three exits off the A13 motorway. The city centre is best reached via the IKEA exit. Take the North exit.

Hotels and accommodations in Delft

Hotels and accommodations in Delft

In Delft, you’ll find a wide variety of accommodations to stay. As the city isn’t known among foreign tourists, you can expect more value for money in Delft compared to Amsterdam. Travel time from Delft station to the heart of Amsterdam is approximately 60 minutes. So if you’re looking for a quieter option than Amsterdam and you’re willing to travel a bit, Delft might be a good place for you to stay! Check out the latest deals below.

The centre of Delft is not accessible for motorized vehicles unless you have an exemption. It is most easy to park your car in one of the city’s parking garages. The garages are all within walking distance from the centre of Delft. Parking in a parking garage is the safest, easy and cheapest way to park your car. Parking on street in the regulated area is also possible. Without a permit, this is only allowed on very few locations.

Are you travelling to the centre of Delft by car? Park safely and easily in one of our garages. Each parking garage is open 24/7 and equipped with camera supervision. Here are some of them and their rates and addresses.

Get to know what moment of the year you should visit Amsterdam. Prepare yourself in advance.