Muiden is an ancient village with rich history, on cycling distance from Amsterdam. The small streets of the medieval town designed for horses with carriages will make you feel like you’ve traveled back ages in time. Muiden is a perfect village if you want to get more feeling with living in the Netherlands outside of Amsterdam. Especially in summer, Muiden is visited by both national and international tourists. It can be easily visited by all means of transport; boat, bike, motorcycle or car. The major attraction is the Muiderslot which is marketed as ‘The Amsterdam castle’. But even if you’re not planning to visit the castle, you can still spend some time wandering the alleys of this sleepy village.

Things to see & do in Muiden

Things to do in Muiden

1. Explore the medieval town by foot

Muiden is a true hidden secret of Amsterdam. Exploring the medieval village by foot will keep you occupied for a while; the tiny streets, old buildings, and fortresses will fascinate an adventurous explorer for at least a couple of hours. Are you into photography? The picturesque village of Muiden will offer you more than enough unique sights to fill your camera with.

2. Enjoy one a drink or something to eat on the terraces next to the sluice and watch the boats pass by

By now you probably know that big parts of the Netherlands are situated below sea level. However, this concept might be a bit hard to grasp. In Muiden the concept of living below sea level really comes to life while having a refreshment at one of the cafes near the sluice. The sluice at Muiden is the gateway for boats going to the IJsselmeer. You can see how the boats enter the sluice from the river, waiting for the water to reach the same level as the IJsselmeer. This demonstrates how the water level of inland rivers are artificially kept low, by pumping out the water.

The Muiderslot or Amsterdam Castle tells an interesting story about the history of the Netherlands. The castle in Muiden once was part of important water defense lines, such as the Defence Line of Amsterdam and the New Waterline. The Muiderslot was one of the fortifications on these historical defense lines. During your visit, you will learn more about how the Netherlands had planned to flood certain areas of land as a defense mechanism for hostile armies. 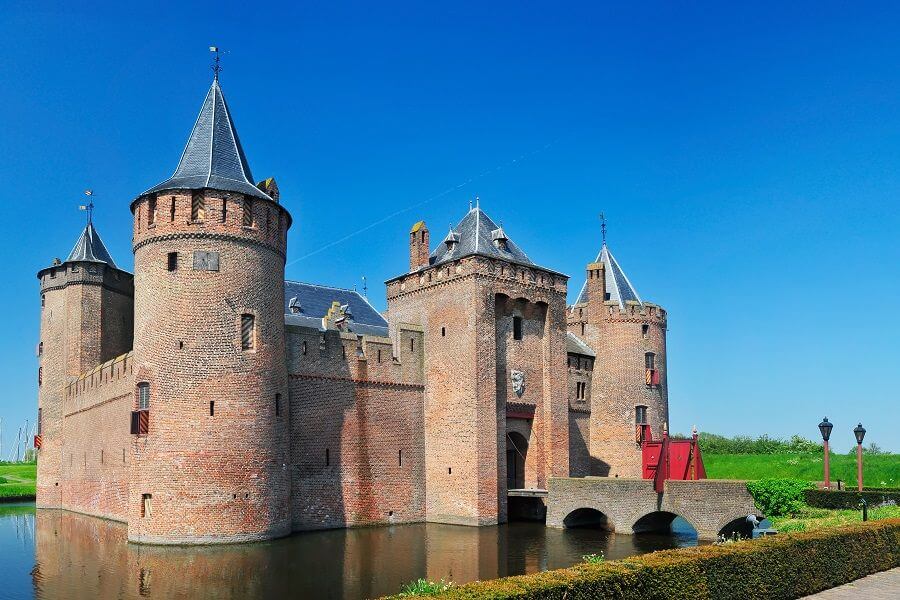 4. Get the freshest milk ever from the milk drive-in

While America is probably the founding father of the drive-in concept, Muiden is home to the world’s only Milk drive-in. At this dairy farm, you will find a tiny building with a sign ‘Melkdrive’. Here you can buy milk as fresh as it gets. The milk has not been processed, it just comes straight out of the cow, is filtered and being sold from the vending machine. Within 10 minutes walking from the center, you’ll find the farm called ‘De Koeienkade’, where you can taste unprocessed milk, fresh from the cow! In a tiny store connected to the farm, you can buy some of their home-produced products including (chocolate) milk, honey, jam, and eggs. Make sure to bring some coins as there’s no cashier, but instead, you have to leave coins for the purchased goods.

Besides the Muiderslot, Muiden is home to another fortification of the historical Defense Line of Amsterdam; fortress island Pampus. This island, in the IJsselmeer, is home to a fortress that was part of the Defense Line of Amsterdam. The fortress was constructed between 1887 and 1897 under the Dutch Ministry of War. Before that, the island was nothing but a simple sandbank. The purpose of the island was to provide security from hostile threats coming from IJ river and IJmeer lake. During the WWI the fortress was manned, but it never served in action. During The Hunger Winter in the last year of WOII desperate citizens of Amsterdam were able to walk to Pampus over the frozen IJmeer in search of firewood.

Nowadays you can visit the island by ferry. On the island, you’ll find several interesting artifacts. There’s an audio-tour available in English and German. The audio-tour works through an app, so bring your smartphone and headphones! The ferry service and visit to Pampus cost €16,50 children from 12 years and up and €12,50 for children under 12 years. For more information on the ferry service from Muiden, please visit: http://www.pampus.nl/en/visitors-info/ferry-service/. 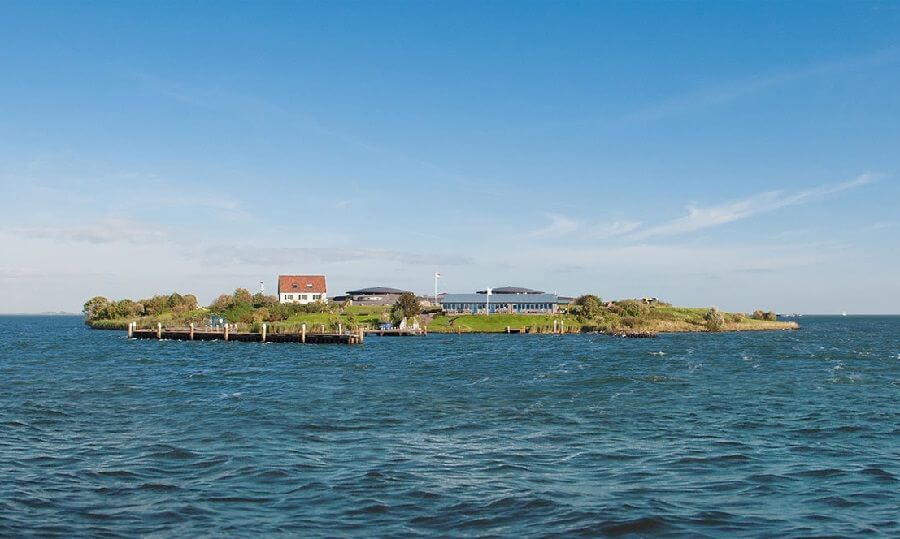 The Netherlands Dutch cuisine isn’t as well-known as for instance the French cuisine, but the Dutch do have a few peculiar delicacies. One of them is Dutch Herring. Dutch Herring is the proof that not only in Japanese culture fish is being eaten raw. The Dutchies have been eating herring raw for centuries and still do so today. If you’re brave enough to give it a try, Muiden is a perfect place to do it; the fish stall in Muiden sells herring of very good quality and the filleting of the fish happens right in front of your eyes, like it should be. Is your stomach not made for raw fish? Don’t worry as you can get fried fish (fish and chips style) from the stall as well. Please do keep in mind that the fish stall is only open from Wednesday through Saturday. However, if the stall is closed you can also try a Dutch delicacy from the snack stall across the street. There you’ll find homemade fries and Dutch croquettes for instance.

Hotels and accommodations in Muiden

Hotel and accommodations in Muiden

In Muiden, accommodations are quite hard to find, make sure to book well ahead to avoid disappointments. Check out the latest deals in Muiden below.

Cycling Route to Muiden and Points of interest the map

How to get to Muiden

Muiden is situated South East of Amsterdam. From the city center, it’s approximately 16 km. For the sporty people amongst us, that’s a perfect distance for cycling. At a normal cycling pace, you should be able to cover this distance in just under one hour. Check out the cycling route below that we’ve plotted; it will take you along the highlights of the villages Weesp en Muiden. If you’re just looking to see the highlights of Muiden, you could, of course, take a shortcut back to Amsterdam as well.
If the Dutch weather doesn’t allow you to go by bicycle, there’s also the option of traveling by public transport. There’s a bus connection to Muiden from Amsterdam Amstel Station. Check out the next paragraph for more detailed instructions.

From Amsterdam to Muiden by bus

Once you’ve made your way to Amstel Station, make sure to find the front of the station from where the trams and buses depart. From Amsterdam Amstel there are 3 possible bus lines to Muiden, these are the following lines:

All the buses listed above stop at “Muiden, P+R terrein“. This is the bus stop where you have to get off. From there it’s a 7-minute walk to the center of Muiden. Make sure to follow the signs for “Muiderslot”

Cycling route from Amsterdam to Muiden and Weesp

In the map below we plotted a route from Amsterdam to both Muiden and Weesp. The route takes you along small roads through the rural areas around Amsterdam. As there is little traffic the route is perfectly suited for kids as well. If you will cycle the route according to the map, you will cover 42 kilometers which comes down approximately two and a half hours of cycling. However, along the route there are plenty of sights and stops to take a rest. Depending on your stops of choice you will be able to spend anywhere from 4 to 8 hours on this day trip from Amsterdam.

Learn all about this world famous beer brand