There are four different acts and the live shows available consist of striptease acts, soft S&M shows and the popular banana show. 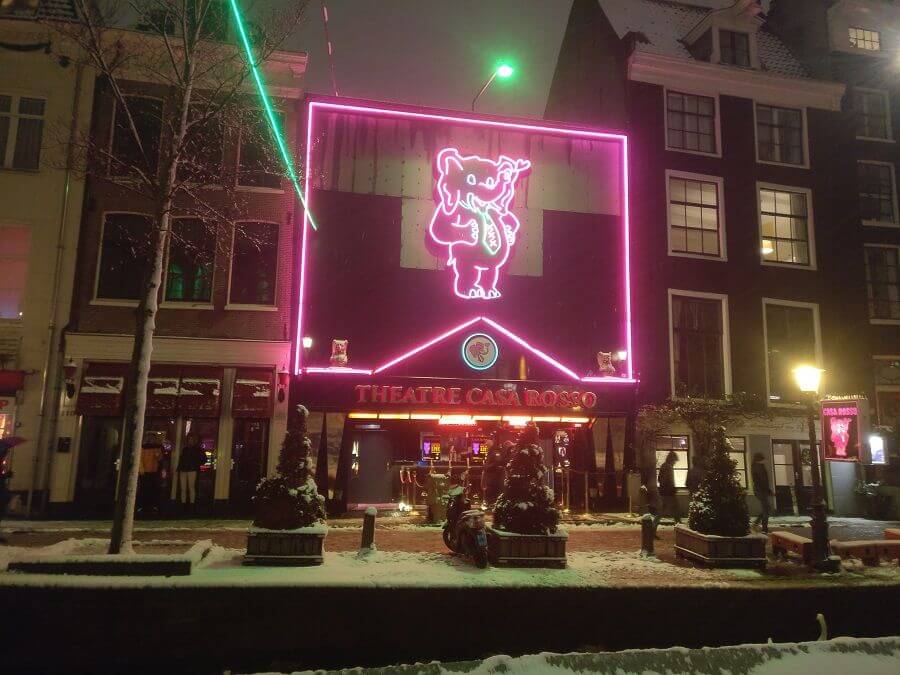 Regular entrance at the door

– Sorry, at the moment, no discount code available –

Am I allowed entrance into Casa Rosso when I’m 17?

No, Casa Rosso is strictly for adults. Minors under 18 years of age are not allowed into Casa Rosso.

Can I host my party at Casa Rosso?

Yes of course! Casa Rosso is a very popular club for people who want to host hen and bachelor parties.

When I buy a ticket, am I allowed to go anytime I want?

Yes, your ticket is an open ticket and you can visit whenever you choose. Just make sure you check the opening and closing times before heading to Casa Rosso.

Do I need to print the e-tickets?

Yes! You absolutely need to print your ticket because tickets can’t be scanned from a phone.

Casa Rosso is situated in the centre of the Red Light District.

Casa Rosso On the City Map

Casa Rosso is located right at the heart of the Red Light District. It is less than a ten-minute walk away from Central Station.

Stop at Dam Square and walk to the Red Light District.

We are always interested to find out about our visitors' experiences. Please share your Casa Rosso reviews and help fellow visitors! What did you think of Casa Rosso? Would you recommend it to friends? Did you have a wonderful time? Let us know and please be patient, as we check all reviews by hand. Yours will be posted soon!

Went to this place with a few mates, had a couple of beers already. Got a bit noisy as you can get. So the lady on stage asked for a volunteer. One of my mates jumped up, got invited on stage and gets his ass whipped in some SM-act!

We really didn’t know what to expect from this, but found it rather entertaining. The atmosphere was fun and most of the acts were good, but it’s still a bit pricy. However, you can stay as long as you want.