Amsterdam is a city that doesn’t cease to amaze visitors. From old churches (Oude Kerk and Nieuwe Kerk) to the Red Light District and beautiful canal belt, this city is both old and worth the visit. Begijnhof Amsterdam is an oasis of peace in the busy Amsterdam City centre. It is one of the oldest ‘hofjes’ in Amsterdam. A ‘hofje’ is a Dutch word for a courtyard with almshouses around it. They have existed since the Middle Ages and have provided housing for elderly people (mostly women). They were privately funded and served as a form of social security.

As the name suggests, the Begijnhof was originally a beguinage founded in the fourteenth century. A beguinage, from the French term béguinage, is an architectural complex which was created to house beguines: religious women who lived in a community without taking vows or retiring from the world. Originally, the rear facades of the Begijnhof were in the water. The damping of, among other things, the Spui and the Begijnensloot has caused the surrounding water to disappear. 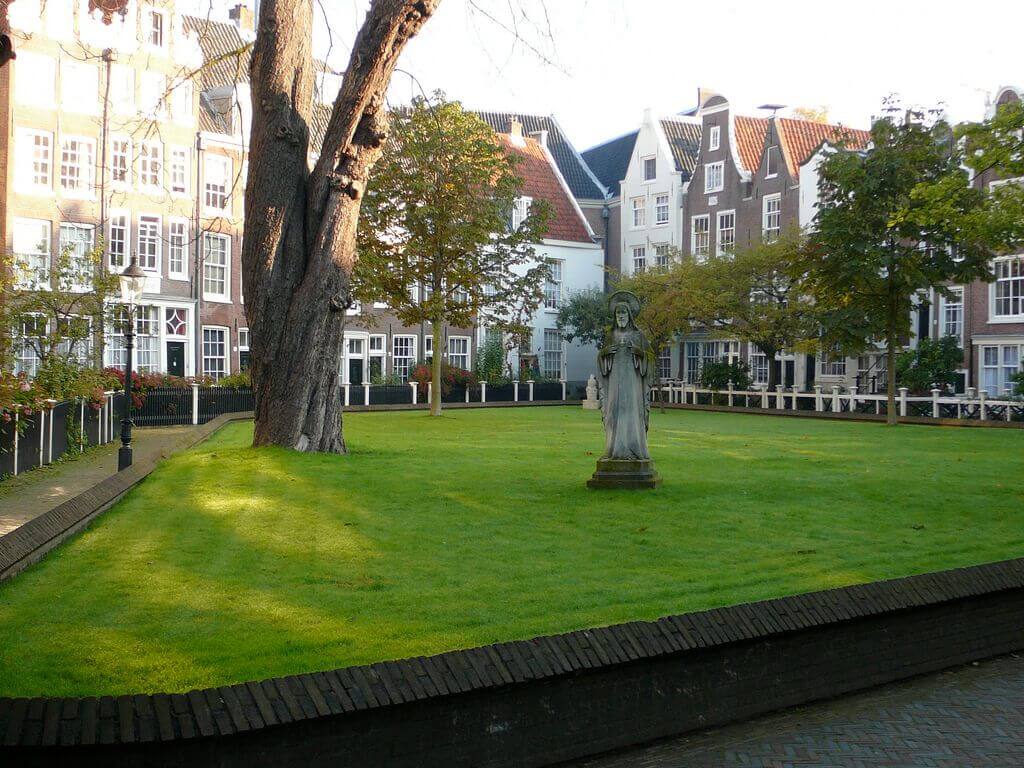 History of the Begijnhof Amsterdam

Around the year 1150, a group of pious women decided to join together into a religious community, with the primary aim of taking care of the sick and providing education. These were the first ‘beguines’, although they were not referred to by that name at the time. The women were not nuns and did not live all their lives in the seclusion of a monastery. Even though they had to be unmarried, they could revoke their vows at any time and leave the beguinage for reasons like getting married or being with family.

The origins of the Amsterdam Begijnhof’s courtyard can be traced back to the second half of the fourteenth century. The exact foundation year is unknown. Located right behind the Amsterdam City Museum, the beguinage has now become an oasis of peace in the bustling heart of the city centre. The Begijnhof consisted of small houses and a church, around a courtyard that was always closed in the evening. During the Reformation, the beguines had to relinquish their church to the English and have been called the ‘English Church’ since then. Over time, the medieval houses were rebuilt or replaced, but the facade of the house at number 34 has been preserved. The house dates from the second half of the 15th century and was reconstructed in 1957 using the original materials.

The Begijnenhof Amsterdam is largely open to visitors. The northern part, where there are only houses, is only accessible to the residents of the houses and their guests. In the garden, there is, among other things, an image of a Beguine. Most facades in the Beguinage date from the 17th and 18th centuries. The houses themselves are often older than the facades. The façade of the wooden house at Begijnhof 34 is the most unique of all of them. The English Reformed Church and the Beguinage Chapel can be found inside the court.

A video on Amsterdam's Begijnhof

The Beguinage is open daily for visitors from 9 am to 5 pm and closed on Sundays. There are two entrances: on the north side of the Spui and on the Gedempte Begijnensloot (in the continuation of the Schuttersgalerij).

Entrance is free of charge.

How To Get To The Begijnhof Amsterdam

The Begijnhof courtyard is enclosed by the Kalverstraat, Spui and the Nieuwezijds Voorburgwal. There are entrances on the north side of the Spui and on the Gedempte Begijnensloot. The Begijnhof can be reached from the Amsterdam Central Station and Leidseplein via tram and also by walking.

From Amsterdam Central Station By Tram: Tram 4, 12, 14 and 24 – Stop at Tram Stop SPUI and walk to the Nieuwezijds Voorburgwal.

From Leidseplein by Tram: Tram 2, 11 and 12 – Stop at Tram Stop SPUI and walk to the Nieuwezijds Voorburgwal.

If you to walk from Amsterdam Central Station, you have to walk through the Kalverstraat shopping street towards the Dam Square, Madame Tussauds and Ripleys Believe It or Not! The Kalverstraat leads all the way to the Spui and the Begijnhof can be located right behind the Amsterdam Museum.

Begijnhof Amsterdam on the City Map

Discover everything about Amsterdam by paying a visit to the city’s museum!

Ripley’s Believe It or Not!

Check out the wonderful world of the weird and the bizarre at Ripley’s Believe It or Not!

Some nice views, especially the initial one. Please correct the pronunciation–The second syllable (gijn) must be accented rather than the first (and try to get the Dutch “ggg”). It will sound something like this: bu-GgYN-hof