The Hermitage in Amsterdam is an art museum located on the Amstel river. It is a branch of the Hermitage Museum in Saint Petersburg, Russia, one of the largest museums in the world. A great lover of art, Catherine the Great founded the Russian counterpart in the eighteenth century. The location in Amsterdam is used to showcase some of the more than three million pieces of art that were once housed in the original museum. Today, almost 400,000 visitors visit the impressive Hermitage Amsterdam annually.

Initially a women’s retirement home, the Hermitage Amsterdam building has stood for over 250 years.  The interior of the structure was renovated into an art gallery in 2009, costing around €40 million at the time of its completion. The remodelers took care to insure that the exterior appears much the same as it did when it was first built, helping preserve the Dutch culture of the past. The restoration has also allowed the museum to become part of multiple sustainability projects to reduce energy consumption.

A brief summary below will provide you an introduction of all the beautiful exhibitions that are being held right now at the Hermitage.

In this exhibition, the Hermitage and the Rijksmuseum have brought their collections together for the first time, for an overwhelming experience of thirty colossal group portraits from the 17th century. For more than 30 years during this time, the Netherlands were world emperors. Known as the Golden Age (or Gouden Eeuw), this period marked a turning point in Dutch history.

This exhibit, standing for power and religion, showcases over 200 stunning art works by both and amateur and international artists, such as those of Chinese and French descent.

A brand new exhibit that allows visitors a chance to see Amsterdam as a panoramic timelapse. See how Amsterdam looked when it was first founded in the Middle Ages, all the way to the present look and feel of the city, with each image from the vantage point of the Hermitage building!

The Hermitage is showcasing their impressive collection of jewels in the new exhibit subtitled The Glitter of the Russian Court. See the jewellery and gowns worn by royalty before the Russian Revolution.

Hermitage Amsterdam is open for almost the entire year. It only closes its doors on King’s Day, April 27th. The hours are consistent daily from 10 am – 5 pm, except for Christmas Day and New Year’s Day, from 12 pm – 5 pm.

Visitors can buy Hermitage Museum exhibition tickets separately, or purchase the Hermitage All-In to access the entire building for only €25.00.

Select Images from the Portrait Gallery
Address, Contact Information and Route to the museum

The best way to get to Hermitage is via Waterlooplein. With the Public transport accordion below you can navigate easily from any direction by public transport. 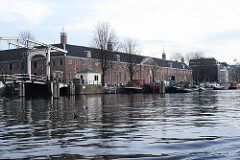 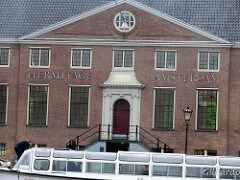 Frequently Asked Questions about the Hermitage

Hermitage Museum on the City Map

The easiest way to get to the Hermitage is by taking the metro or tram. THere is also a option by bus, but you have to count on a 10 – 15 minute walk to arrive at the museum.The following metro lines will take you to the museum:

Use this widget below. It will guide you from every direction to the Hermitage Amsterdam. It shows you the best way to travel via public transportation. This application will help you when you are not sure which metro, bus or tram you can take from your location.

We are always interested to find out about our visitors experiences. Please Let us know what you thought of the Hermitage museum and help fellow travelers! Would you recommend it?