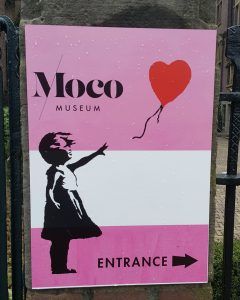 The Modern Contemporary (Moco) Museum in Amsterdam houses a collection of artwork by unparalleled artists from the past century. Within three stories of floor-to-ceiling creations, the gallery is located right on the Museumplein. The Alsberg townhouse where the museum has found a residence, built in 1904, creates a nice backdrop for the artists it showcases.

Note: Some of the exhibits on this page may not be available at the time you’re visiting Amsterdam. We will try to update the page as soon as we hear of a new exhibit.

Moco prides itself on being one of the largest collections of Banksy’s artwork, with over 90 original pieces within its walls. Banksy started as a British street artist whose appeal, other than his obvious artistic ability, is largely credited to the surrounding mystery of who is behind the spray can. From his beginnings on the streets of London in the 1990s, Banksy has since created groundbreaking and inspirational art in the form of sculptures and political pieces. His work has become so popular among mainstream media that chances are high visitors have seen it somewhere, maybe even on buildings put there by the artist himself! Banksy’s canvas works, sculptures, and even graffiti rescued from torn-down buildings can be seen at Moco.

Order your discounted Moco Museum tickets and skip the line for €13.64 at Tiqets.com

A master in pop art and parody, Roy Lichtenstein created influential and thought-provoking pieces. His work throughout the twentieth century has continued to have an effect on art lovers around the world, with his signature style of a seemingly simple pairing of lines and dots. Roy Lichtenstein rose to prominence in the 1960s with his comic-book style drawings of popular characters such as Mickey Mouse. The Moco Museum’s most anticipated attraction is a 3D room installation of Lichtenstein’s famous piece, “Bedroom at Arles” (1992), where visitors can enter the painting and sit on the bed and chair, becoming a part of the art.

For the first time in the Netherlands, the art of New York-based creator, Daniel Arsham, will be showcased at the museum. What sets Arsham’s work apart from the other exhibitions at Moco is his use of architecture, film, and sculpture to create a thought-provoking, new experience. The alternating realities and, perhaps, mind-bending sights allow the visitor an inside look into the mind of the artist. The interactive installation, “Calcified Room,” is a never-before-seen exhibit that seamlessly combines archaeology, pop culture, and architectural styles.

The Moco Museum is open every day of the year – even holidays!

Tickets are available at the entrance to the museum or online. Regular admission for adults is €14.50. Discount tickets at €12.00 are available for students and I amsterdam card holders. The museum also offers an optional audio guide tour for €2.50.

Near the opening and closing of the Moco Museum, tickets are available at a discounted price of €11.50. If you don’t want to spend time in the queue, make sure to buy your tickets online using the blue buttons above and below!

Order your discounted Moco Museum tickets and skip the line for €13.64 at Tiqets.com

– Order your tickets via Tiqets.com make sure to use our exclusive discount code ‘THINGSAMS05‘ and get 5% discount –

Public Transport to the museum

The Moco Museum is located in the heart of Amsterdam at the Museumplein, right near the Rijksmuseum and the Van Gogh Museum. 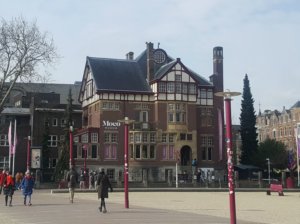 The Moco Museum is found in a large, picturesque townhouse in Museumplein, between the Rijksmuseum and the Van Gogh Museum.

Moco Museum on the City Map

We are always interested to find out about our visitors' experiences. Please leave your Moco Museum review below and help fellow travelers! What did you think of the museum? Would you recommend it to friends? Did you have to wait long at the entrance? Include all you want in your review. Please be patient as we check all reviews by hand, and know that it will be posted soon!

Walk right across the Museumplein to visit this historical museum.

Visit this collection of the famous artist while you’re in the area.