Things to do in Amsterdam » Red Light District

The Amsterdam Red Light District is one of the most talked-about neighbourhoods in the city, due to its housing of the world’s oldest profession. While prostitution can be found all across the globe, it usually happens behind closed doors. But not in Amsterdam! In the Red Light area Known as “De Wallen” (pronounced Day Vaw-len) to the Dutch, you’ll find prostitutes offering their “services”, from behind a window. Along with that, the area is known for its many live sex shows, sex shops, brothels, and strip clubs. Although the area used to be quite a notorious and unsafe area, things have changed a lot over the past decades. Besides pickpockets, the area is fairly safe to visit especially during the daytime. The oldest erotic theatre in the area is Casa Rosso, which until today, can be visited for some 18+ action. There’s no such thing as an age restriction to walk through the area, however, the adult shops and adult entertainment do not allow minors.

Check out tours and activities in Red Light District on Getyourguide.com 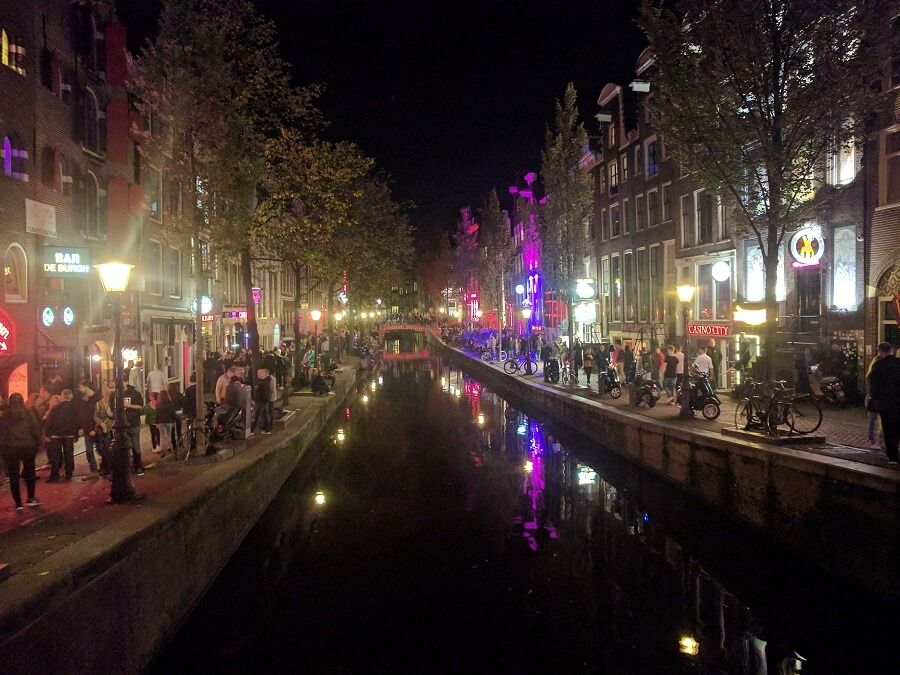 The history of the area dates all the way back to the 16th century, as the Catholic government was being overthrown by Protestants. The district was transformed, making way for nightlife and entertainment for the many sailors and travellers passing through Amsterdam. At the time, the harbour in Amsterdam was one of Europe’s most important trade centres. It might be hard to imagine today, but Amsterdam has always been situated at sea. That was until 1932 when a giant dam called “Afsluitdijk” was completed, that cut off the former “Zuiderzee” from the North Sea.

Check out hotels in Red Light District on Booking.com

Behind the scenes of prostitution; Bonton sex club tour

Prostitution is one of the most controversial topics in Amsterdam. Everybody has something to say, but few people have actually the knowledge to know what they are talking about. If you want to get a rare view behind the scenes, you might enjoy the Bonton sexclub tour. In this real-life brothel, that is still in service at night, you will get an exclusive peek behind the scenes. A former prostitute working in a sex club will tell you all about the job, the money and the emotions involved. You can ask her any question and get an honest answer! Bonton is not located in the Red Light area though, but instead, it’s located near the Heineken Experience.

Book a guided sexclub tour
Check out tours and activities in Red Light District on Getyourguide.com 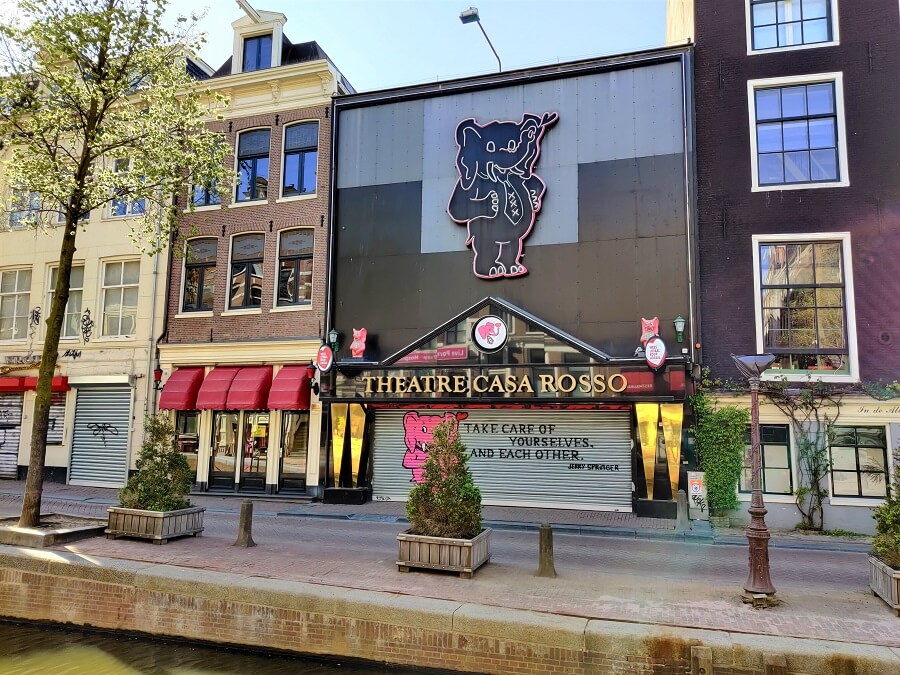 Do you want to get a taste of the 18+ entertainment? Be sure to pay a visit to Casa Rosso! This is the oldest, most iconic place to experience the Red Light District. The theatre reminds of a small cinema, but instead of seeing a movie, you’ll be shown various 18+ plus shows. Think of striptease, S&M and live sex shows!

Find out more about Casa Rosso and book tickets here
Check out hotels in Red Light District on Booking.com

What is the Amsterdam Red Light district and how does it work?

We’re aware that there’s quite a bit of mystery on this specific part of Amsterdam, so let us explain you a bit more and answer some of the most frequently asked questions. The Amsterdam Red Light District is not an attraction. It doesn’t have an entrance or an exit, but it’s simply a small neighboorhood. It basically consists of two canals and some connecting alleys. In the area, you’ll find a lot of 18+ entertainment, sex shows, sex shops and brothels in the form of windows. Apart from that, you’ll find a lot of restaurants, bars and hotels. The area draws lots of visitors who are curious to experience the neighbourhood first hand. Now, go let’s go through some of the most common questions about the area.

No, the area is always freely accessible as it’s just a neighbourhood on public roads. It does not close at a certain time. However, if you’re looking to use the services of a sex worker, you’re best off being there before 4:00 am when the windows start closing. The women that work there, work independently so can stop whenever they like.

If you want to make use of a sex workers’ service, simply walk up to the window to indicate that you’re interested. They will open the door for you, so you can discuss your wishes. Treat the person behind the window with respect, like you’d like to be treated. Remember; the workers have the right to refuse clients, don’t take this personal, maybe you simply look like a relative. If you agree on the kind of service and the price, you’ll be let in. You must pay cash up front, so make sure you have the right amount on you.

There’s no such thing as an entrance fee, as the area is publicly accessible. The sex workers are free to set their own prices, based on the clients wishes. However, to give you an indication; in most brothels, the tariffs start at €50,- for a short (10-15 minutes), basic service. If you have specific wishes or need more time you’ll most often be charged extra. Do keep in mind, that this information is purely indicative and that the sex workers can set their own rules and tariffs.

The heart of the area is formed by two streets, or canals: Oude Zijdsvoorburgwal and Oude Zijdsachterburgwal. The connecting alleys and surrounding streets are officially part of the Red Light District as well.

Yes, the area is safe both day and night time. The only real threat in the area is pickpocketing. Due to the area being crowded with tourists and a lot of distraction, the area is very popular among pickpockets.

First of all, be respectful to the neighbourhood and the people living and working there. Below, you’ll find a full list of do’s and don’ts. About the age restriction; there’s no age restriction for the area itself as it’s publically accessible. However, we feel that you should question yourself whether it’s really necessary to take minors to window area; the Red Light District and sex workers are already under a lot of pressure of growing tourism. The workers are there to make money and it doesn’t really help to have families staring at their customers, if you go for educational purposes, visit the Prostitution Information Center or Red Light Secrets museum of prostitution. For the shows, shops and brothels, of course, an age restriction of 18 years and over applies. 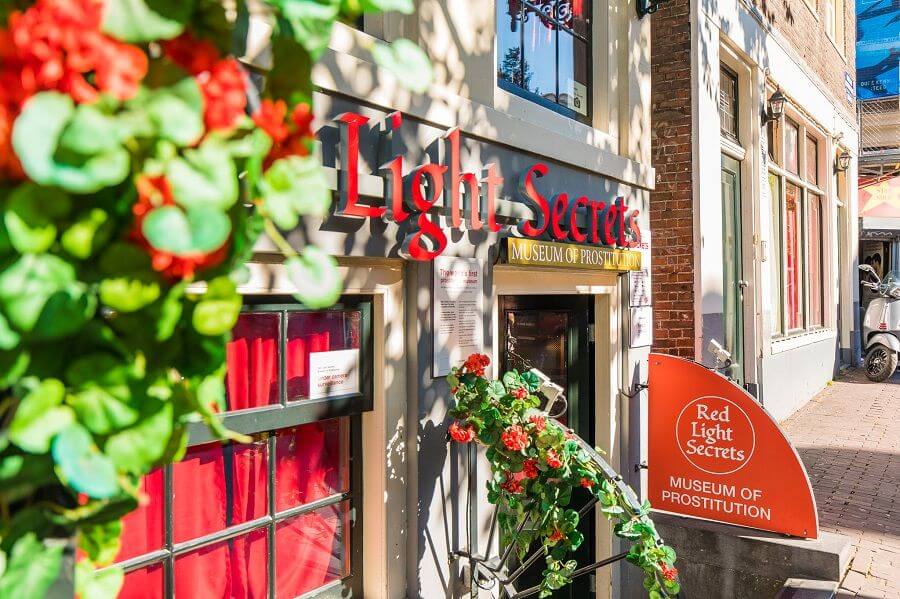 Are you keen to find out more about the Red Light area and sneak-a-peek behind the scenes, Red Light Secrets is your place to go! This former brothel is turned into a museum dedicated to prostitution. You can actually experience sitting in a window to feel what it would be like, working from a window in this neighbourhood. An audio-guide will teach you a lot on the background of the Red Light District and the world of prostitution. The museum will give you a short, but thorough insight in this notorious area of Amsterdam.

You and your family can learn more about the rich history of the neighbourhood by using one of the touring companies. The tour guide can also tell you the do’s and dont’s of the area in order to stay out of trouble and keep it a safe place to visit, as well as other tips about Amsterdam!

If you want to learn more about the Red Light District and its history, you might be interested in taking a tour through the area. It is a safe way to explore the area and learn more about the Dutch political views on prostitution. You will find out how it all started and how locals view it today. We strongly recommend taking a tour from the PIC or Prostitution Information Centre. It is located next to the Oude Kerk (old church) right in the centre of the area.  There are two major reasons why we recommend their tours, over other companies;

The Red Light District of Amsterdam is situated just minutes away from the very heart of the city. From either Dam Square or Amsterdam Central Station you will be able to walk in a matter of five minutes to the prostitution area. So if you’re looking for a hotel near the area, you can take practically any centrally located hotel near Dam Square, or either Central Station or subway station Amsterdam Nieuwmarkt.

Check out hotels in Red Light District on Booking.com
Booking.com

Legal forms of prostution in the Netherlands

Paid sex between adults (18+) is legalized in the Netherlands. Legal prostitution is found in different forms. Besides window-prostitution, found in Red Light District, it’s also legal visiting a Gentleman’s (sex) Club as well as using the services of an Escort Service. In all cases prostitutes are free to refuse a certain customer or certain sexual activities they don’t feel comfortable doing. When you decide to engage in sexual interaction with a prostitute, make sure to respect each other’s boundaries. If not, any actions will be punishable as rape. It is recommended to discuss any specific wishes or preferences upfront. Prices, for prostitution can differ as the sex workers are free to set their prices.

Location of the district

Red Light District is situated right in the centre of Amsterdam. It’s a five to ten-minute walk from Amsterdam Central Station, while walking in the direction of Dam Square, take a left halfway. Most of the district is situated between the Zeedijk and the Warmoesstraat. For a quick impression of the area take a look at the map below.

Dive into the history of house music in the club where the dance scene in Amsterdam was born!

View Amsterdam from it's picturesque canals with a drink or a bite!

Learn about the distillery of the Dutch local liquor; genever. Including some cocktail tasting!