The Houseboat Museum in Amsterdam is really one of a kind. A lot of tourists that wander or cruise along the Amsterdam canals are curious to find out what it must be like living in one of the canal boats. Vincent van Loon, initiator of the Houseboat Museum, decided to give tourists a unique insight in living on a houseboat. He bought The Hendrika Maria which he completely renovated to become classical houseboat and opened it to public.

The idea for the Houseboat Museum

When Vincent returned from teaching children in Tanzania in 1989, he found it difficult to find nice place to live in Amsterdam. The idea of living on a houseboat had crossed his mind before, so he decided to realize this dream. He bought an old boat and personally rebuild it to be his future home. During the years he spend on rebuilding, Vincent noticed how many neighbors and tourists were asking him about living on a houseboat. At some point, when Vincent was having his birthday, a foreign couple appeared among the invitees. They thought that the boat was open to public, as there were so many people on the boat. That was when idea for a Houseboat Museum was born.

Realization of the idea

After some research to the viability of the idea, Vincent bought the Hendrika Maria in august 1996. The boat is a classical houseboat in the sense that the ship is a retired vessel. The boat was no longer profitable to use as a freigther and thus, transformed into a home. The former cargo hold transformed into a living area. Vincent is still greatful for all the help he got back then, to realise his dream. Especially fromer owner of the boat was a major support during the realization of the idea. In 1997 the museum first opened its doors.

History of the boat

Chasing his passion Vincent put major effort in unraveling the history of the boat. And amazingly enough, he succeeded to unravel the boats history all the way back to when it was build in 1904. Some amazing historical facts about the boat include:

To find out more, make sure to visit the Houseboat Museum. Vincent will tell you all about his museum and the history of the boat. Take a look at our blog about staying in a houseboat accomodation yourself in Amsterdam. 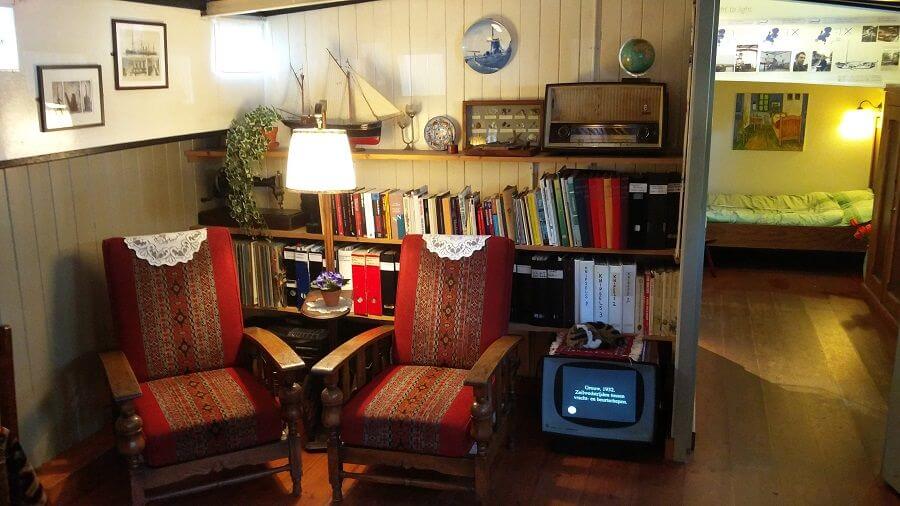 The Houseboat Museum is open 7 days a week during high season; July and August. During low season, from September till June, it’s closed on Monday.

The following dates, the Houseboat Museum is closed:

Tickets to the Houseboat Museum can be acquired from the desk.

Make sure to use this special discount and get €1,- per person off the regular price. All you need to do is show this page on your smartphone at the entrance.

The museum is located on the beautiful Prinsengracht canal within walking distance from both Dam Square and Leidseplein.

Houseboat Museum on the city map

The closest stop to the Houseboat Museum is the stop Elandsgracht. But as the Museum is situated between Leidseplein and the Westermarkt. These tram stops can also be used when going to the museum.

From Amsterdam Sloterdijk:
Head to Amsterdam Central Station and follow the instructions above.

From Amsterdam Amstel:
Head to Amsterdam Central Station and follow the instructions above.

With the widget on the right you can find accurate advice for the real-time travel times based on your current location. This application will help you when you are not sure which bus or tram you can take from your location.

Reviews of the Houseboat Museum

We are always interested to find out about our visitors experiences. Did you enjoy the Houseboat Museum? Would you recommend it?

Also check out the the following museums:

Visit the most interactive museum you’ll ever see!

Learn all about this world famous beer brand