Travel between London and Amsterdam by train

Since 2020 a new, superfast train connection between London and Amsterdam has been introduced. The Eurostar train is a fast train that allows you to travel between the center of London to the center of Amsterdam in approximately 4 hours! From March 2020 onwards, there will be no more need to change trains in Brussels when travelling from Amsterdam to London. The return journey, London to Amsterdam is already a direct connection. The Eurostar trains are modern, comfortable trains with onboard facilities such as WiFi and USB-outlets for charging electronic devices. One-way train tickets between London and Amsterdam start as low as €40,- and trains depart twice a day!

Disclaimer: price mentioned are estimates. Always check the latest prices on the websites of our partners. The prices above were last updated 25th of February 2020.

London to Amsterdam by train

More and more people are travelling by train from London to Amsterdam. That is not surprising, because London is a real happening city. The ideal city for a romantic city trip, a day trip from London to Amsterdam or a few days of culture in the beautiful Dutch city. London has an international character, there are lots of interesting sights and shopping in the historic city is a real pleasure. Amsterdam can easily be reached from London’s St. Pancras International train station. That is where lots of travellers take Eurostar to reach cities all around Europe. The Dutch Railways (NS) and TGV (Thalys) also offer transport via the railways. Thanks to three direct Eurostar trains per day, travelling from London to Amsterdam has become faster than ever! Travellers are at Amsterdam Central Station in 3 hours and 52 minutes. There is no hassle with airport transfers, you can take two suitcases and you can bring liquids in your hand luggage.

In the departure hall, you can buy coffee, refreshments, newspapers and magazines for the train ride.

If travellers choose the Thalys for a direct train ride to Amsterdam, aboard the train, they are never going to be bored with the Metropolitan magazine and free entertainment channel, where they can watch movies, TV series and even children’s programs.

There’s also free WiFi and electrical outlets to ensure that travellers can continue working on their computers while charging their mobile telephones.

Even stretching your legs is also possible. Travellers can walk to the Café Métropole bar carriage, where they can buy hot drinks, soft drinks, sandwiches, meals and snacks. Anyone travelling Standard Premier or Business Premier will receive a meal where they seat. A one-way standard ticket goes for a starting price of €40,-.

Note: Have your ticket ready when you arrive at Amsterdam Central station because you still have to use it to pass through the NS gates. Please note that children under 16 cannot travel from London to Amsterdam without adult supervision.

In addition to the three direct trains, there are several non-direct Eurostar connections from London to Amsterdam that depart from St. Pancras every day. Travellers have to take the Eurostar to Brussels South and switch to the Thalys to the Amsterdam. The travel time is approximately 4 hours and 45 minutes, including 45 minutes transfer time in Brussels South.

Don’t worry about the 45 minutes transfer time. There is so much to do at Brussels-Midi station. You have plenty of time to stock up on chocolate, browse around in one of the perfumeries or just grab a Belgian waffle and a quick beer.

Why travel from London Amsterdam by train?

Of the 9 trains that depart from London to Amsterdam every day, 3 trains run directly, so it’s easy to choose a trip that doesn’t have a transfer.
These direct trains do an average of 6h 11m over a distance of 357 km. However, if you choose a direct train, you can even be there in 3h 52m.
The slowest trains take 12h 43m, and you usually have to change trains once or twice during the journey. However, it can be very cheap.

The travel time from London to the Dutch capital with the Eurostar and the Intercity or Thalys is approximately 5 hours and 32 minutes. With a speed of 300 kilometres per hour, visitors are in Amsterdam in no time.

Note: For the return journey, the Eurostar that departs from Brussels South to London and runs seven times a day. So you’ll have to take an Intercity from Amsterdam to Brussel South and then take Eurostar from there to London.

Where can I buy train tickets for a trip from London to Amsterdam?

You can buy train tickets for a trip from London to Amsterdam from the NS Hispeed, the Eurostar booking website, among others. For the London – Amsterdam route, where you travel directly from London with the Eurostar Thalys to Amsterdam, the starting price is at €50,- for a one-way second class trip. The travel time is 4 hours and 47 minutes.

For the London – Amsterdam route, where you travel via Brussels South to Amsterdam with the Intercity, you pay around €48,- for a one-way trip second class. However, the travel time is a lot longer, you travel from Amsterdam to bustling London in 5 hours and 32 minutes.

Note: If you want to be able to change or cancel your ticket later, you pay a bit more. And the busier the train, the more expensive the tickets become. So be quick and book your train ticket as early as possible. You then have the best chance of the lowest prices.

When you book online, you pay no booking fees. Eurostar departs from the centre of London at St. Pancras station and arrives at Amsterdam Central Station. You can easily switch to the metro or another form of public transport there.

Eurostar had 3 types of tickets:

Note: When you book a train ticket for London to Amsterdam, it is always for a specific train and your seat is reserved. Passengers can, therefore, not take a train sooner or later, unless they order a flexible ticket which can be quite expensive. Cheaper tickets cannot be cancelled. That is only possible with more expensive tickets.

When you book a ticket online you can pay with iDeal or credit card. You must print the ticket yourself (e-ticket) or download the NS International app. PDF barcodes cannot be scanned from your mobile, tablet or laptop. 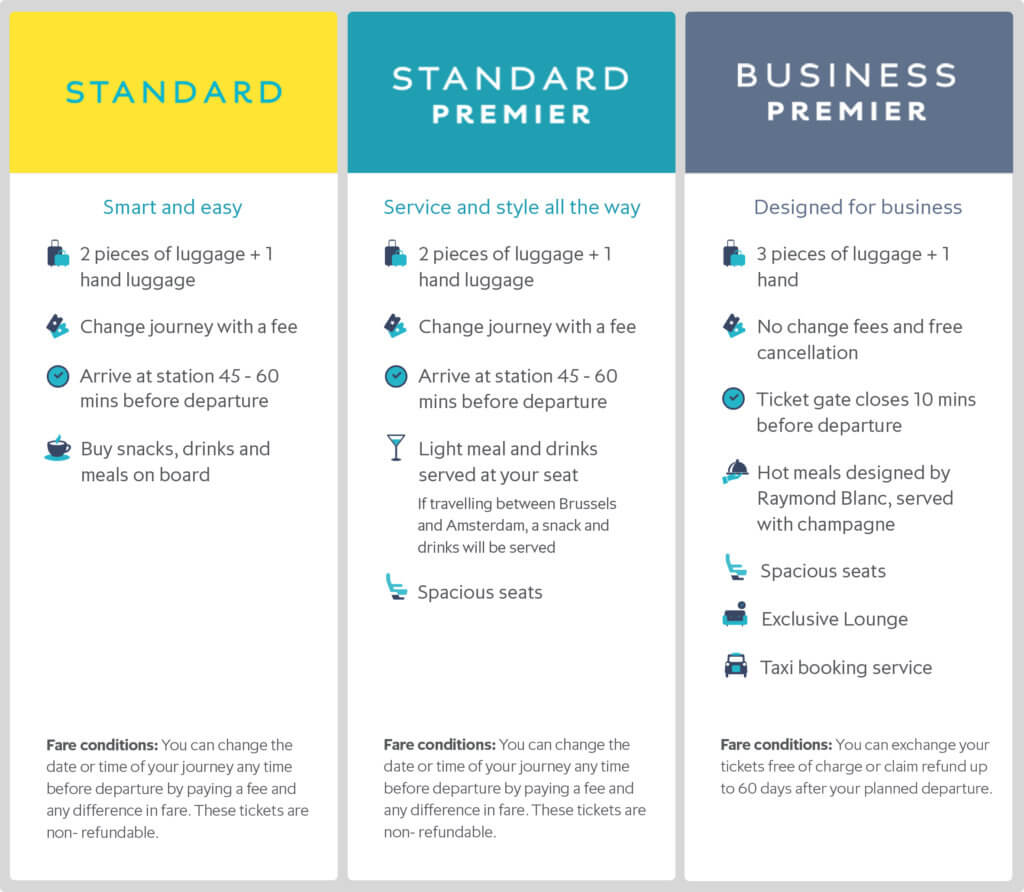 The train journey from London ends at Amsterdam Central station. If you want to travel further by public transport, you have more than enough options. The metro lines 51, 53 and 54 connect the central station to the suburbs of the city. If you want to go to the city centre, then you can transfer to one of the many buses or trams. The trams are outside the train station while the buses are upstairs. Another option is to switch to a domestic train at Amsterdam Central. You can use this to travel to Amsterdam Amstel, Amsterdam Muiderpoort or Amsterdam Bijlmer ArenA stations.

Advantages of travelling from London to Amsterdam by train

Since April 2018, the Eurostar has been running between London and Amsterdam, via Rotterdam. Passengers on the high-speed train must transfer to Brussels on the way due to border control between the Netherlands/Belgium and the United Kingdom. On the way back the check is in Amsterdam and Rotterdam and a transfer is not necessary.

After Britain left the EU, the regulations have changed. After long negotiations between Britain and the EU, an arrangement has been reached, whereby boarding passengers traveling from London to Amsterdam will be checked in London and on the way back, will also have to pass through British customs at the train stations in Amsterdam and Rotterdam and then continue their journey without any further stops. The stopover at Brussels South will continue to exist, for passengers boarding and alighting in Belgium.

The fastest connection between London and Amsterdam, with one transfer, is now 4 hours and forty minutes. From the spring of 2020 that will be half an hour shorter, without transfer. The frequency of the connection to the Eurostar is now three times a day.

The question is whether the actual travel time will be shorter. The Eurostar Departures Terminals in Amsterdam and Rotterdam, where the ticket, baggage and passport check takes place, close half an hour before departure.

The departure of the UK from the European Union (Brexit) doesn’t have a lot of effects on the train connections. The UK has never been a member of the Schengen zone, so border control was always necessary.

Click on the Blue Bar below to check out the departure times, dates and ticket prices. Book on time for the best prices!

Note: Please bear in mind that the ticket prices mentioned above are not fixed prices. The departure date and time have a huge effect on the price of the train ticket.

Advantages of travelling from London to Amsterdam by train

The benefits of travelling from London to Amsterdam by train are numerous. Travelling by train from London to Amsterdam is comfortable, cheap, convenient and fast. The Eurostar has a speed of up to 300 kilometres per hour. You will, therefore, be in the Amsterdam City centre within a short period of time. With the Intercity and Eurostar, you travel from our capital to London in approximately 3 hours and 52 minutes.

Click on the Blue Bar below to check out the departure times, dates and ticket prices. Book on time for the best prices!

Note: Please bear in mind that the ticket prices mentioned above are not fixed prices. The departure date and time have a huge effect on the price of the train ticket.

Timetable for the train

Direct boarding, no booking fees online, comfortable seats and arriving in the heart of the city. The travel time for the route London – Amsterdam is 3.52 hours. Enough time to prepare your meeting or trip in comfort.

From London to Amsterdam a super fast, direct Eurostar runs twice a day from 4 April. This Eurostar will take you from London St. Pancras International to Amsterdam Central in 3 hours and 52 minutes.

The first train departs London St. Pancras at 07:15 in the morning. About every two hours a train goes from London to Amsterdam. This allows you to decide for yourself at what time of day you prefer to leave. On most days you can board the train between 6:30 AM and 5:00 PM in London. But there are a number of exceptions. For example, the first train leaves on Saturday at 7 a.m., while you can travel to Amsterdam from 9 a.m. on Sunday. On Friday and Sunday evenings, the timetable also goes on for an hour longer than normal.

The Eurostar departs London St. Pancras to Amsterdam Central Station and then follows the high-speed line to the Channel Tunnel. There are calls at Ebbsfleet International and Ashford International along the route. After Eurostar has passed the Channel, it travels through France and Belgium over high-speed lines to Brussels South/Midi station, and then continues to Antwerp, Rotterdam, and finally stops at Amsterdam Central Station.

Looking for public transport near you?

Via the Dutch public transport system, it’s very easy to get instant real-time travel information to the airport or the closest train station. Most of the people in the Netherlands use the site or app from 9292ov.nl. Via the button below, you go instantly to their site.

Get to know what moment of the year you should visit Amsterdam. Prepare yourself in advance.