Things to do in Amsterdam at Christmas 2019

Amsterdam is a city that lends itself particularly well to winter. Crisp, frosty mornings are the perfect time to take in the beauty of Jordaan and the Canal Ring, while the numerous parks take on a peaceful, calming air. There are, of course, plenty of winter and festive fun to be had as well, so if you find yourself around at this time of year, here are the best things to do – just dress properly for the weather!

It just wouldn’t be Christmas without a few traditional markets dishing out unique gifts, mulled wine, and warming winter snacks. Amsterdam’s biggest and best can be found on Museumplein at the Ice* Village, with live entertainment and ice skating (see below) in one of the city’s most stunning settings. For a market with a difference, head west to Westergasfabriek and the Funky Xmas Market – Sundays only – for handmade art, fashion, and accessories from local artists and creative, or cross the IJ to Noord for Kerstmarkt, a delightfully quirky market with live bands and a special children’s program, in the huge industrial Kromhouthal warehouse. 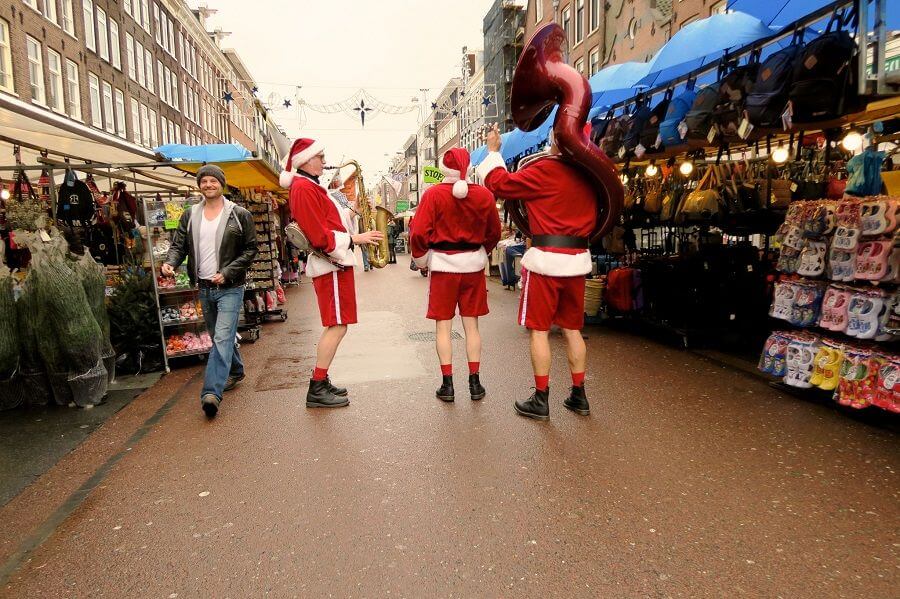 But if you really want to immerse yourself in the Christmas spirit, make your way to Haarlem for one of the Netherlands’ largest and most beautiful markets – truly a must-see experience with live carol singing and hundreds of stalls packing out the city centre.

It’s no surprise the Netherlands keep producing world-class speed skaters – the Dutch are crazy about ice skating. Yes, it does snow here sometimes, and just occasionally, the canals freeze over! But there are plenty of official places to indulge in a spot of schaatsen whether you’re after a bit of fun or a few serious laps.

There’s a sizeable outdoor rink at the Ice* Village in Museumplein (see above), while a more compact, and child-friendly, space can be found in Rembrandtplein – skates can be rented in both locations. If you require a little more speed and freedom, Jaap Eden is the city’s largest and best-known centre, with a 400m outdoor rink, or for a few laps in a historic location, from the 18 January to 28 February you can skate around Amsterdam’s Olympic Stadium at what’s dubbed the “coolest rink in the Netherlands”.

Get your Ice*Amsterdam tickets for Museum Square with discount for €11,70

– Use our Tours-tickets.com discount code ‘THINGSTODO10’ and get 10% off on all cruises! – 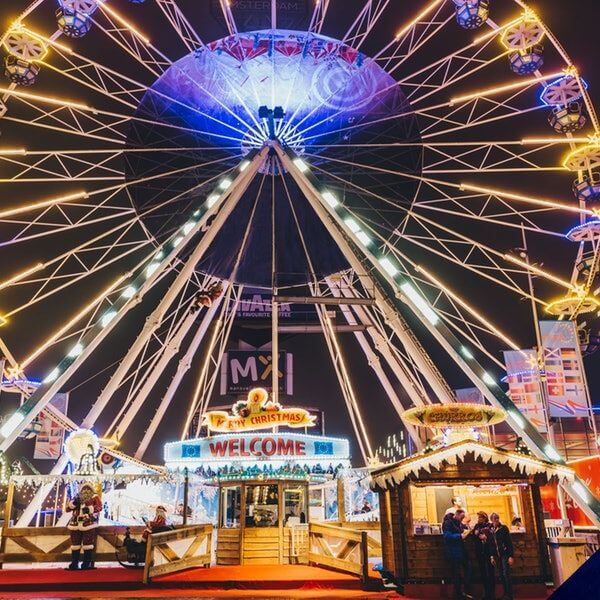 After last year’s success, this year there’ll be a new edition of “Het Amsterdamse Winterparadijs”. This indoor event is great fun for the whole family! You can visit the indoor fair from December the 21st till the 30th of December. Prepare for a whole lot fun with ice-skating, sledge riding and live-shows! Of course, you’ll be surrounded by Christmas songs, trees and snow. You’ll find plenty of food stalls and pop-up restaurants from where you can get a variety of fresh beverages. If you’re in for a drink, you can enjoy mulled wine, beer or any other drink at the après-ski area. Need a rest? Go to and watch a Christmas movie in the lounge area. Last, but not least, you can also enjoy some performances by famous Dutch artists in the winter fest area. The winter fair is being held at Amsterdam RAI which is really easy to reach by any form public transport; tram, subway, bus or train.

Get your Winterparadijs tickets (limited) now for €19,50

Now in its seventh edition, the Light Festival has become a winter must-see for visitor and locals alike. From now until the 20th January, the canals are lit by thirty illuminated artworks and sculptures from local artists and international stars alike. This year the theme is ‘The Medium is the Message’, the famous statement by Canadian scientist Marshall McLuhan, and is an investigation into the role of light in conveying a message and the city of Amsterdam as a medium for telling stories.

There are many ways to explore the festival, and if you want to see it all, it’s best to split it over a few days. Guided walking tours are common, or if you prefer to go at your own speed, there’s a special app which will take you on a walking tour of the artworks – and give you information about each one. Alternatively, join one of the many special boat tours cruising along the route, most of which take around 75 min – just dress warm as many are on open top boats! And there’s even one that hosts a theatre performance.

– Use our Tours-tickets.com discount code ‘THINGSTODO10’ and get 10% off on all cruises! –

Besides the several boat tours available, you can also choose to enjoy the artworks on a special walking route. Check out this year’s walking route below. The total route is 8.5 kilometres. If that’s a bit too much for you, you can always choose to cheat a bit with the aid of public transport. 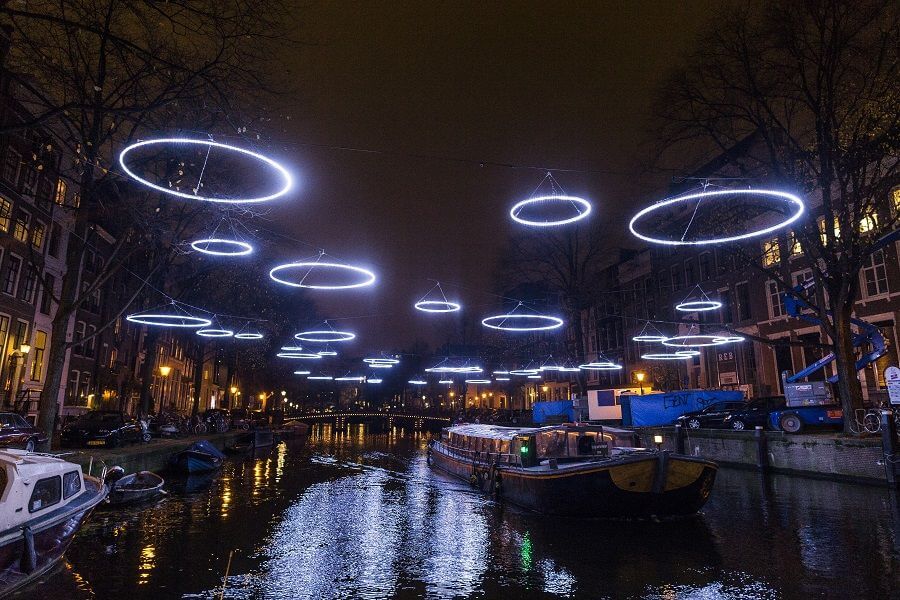 For a night out with a difference, head to the Koninklijk Theater Carré for the World Christmas Circus, an Amsterdam festive tradition for 34 years and one of the most acclaimed circus festivals in the world. Featuring spectacular horseback acrobatics, song, and dance, it’s quite the spectacle and no surprise it’s become such a Christmas institution. 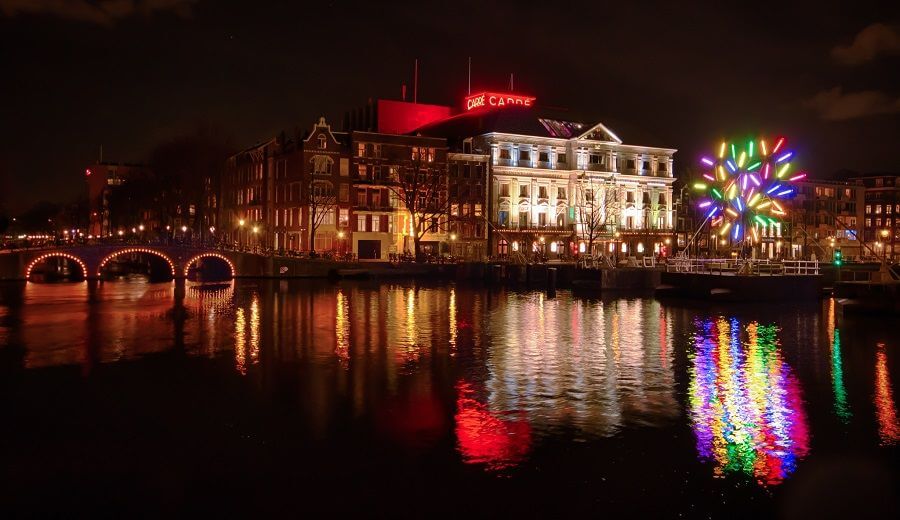 Hot on the heels of Christmas is New Year’s Eve, the biggest party of them all! And however you like to celebrate, Amsterdam has you covered.

Just about every club and bar have a special night of festivities planned; you could take in Ratatouille’s mini winter festival, or lose yourself in techno at Awakenings. Come midnight, there’s a spectacular firework show over the harbor – and there’ll be plenty of impromptu rockets and bangers going off all night. Don’t forget to buy some oliebollen (deep fried dough balls) to scoff at midnight (A Dutch tradition), and if you’re in need of refreshing come the morning, jump on a train for 30 minutes to Zandvoort aan Zee for the famous New Year’s Dip – basically, you strip off and run into the sea. What a bracing way to start the year!

Does it snow in Amsterdam?

Get to know what you can expect for the winter in Amsterdam. Prepare yourself in advance.

0 Comments on "Things to do in Amsterdam at Christmas 2019"

Post navigation
← Amsterdam Light Festival 2018-2019 edition17+ best things to do with kids in Amsterdam and surrounding areas in Holland →
Share: