The Netherlands is a real cycling country. Getting around by bike is part of the Dutch culture. There are more bikes than people in the country! For instance, there are living around 800.000 people in Amsterdam and 881.000 bikes in the city. You should not leave Amsterdam, without experiencing cycling in Amsterdam!

Get to know the most important information about cycling in Amsterdam:

Scroll down to find all the detailed information for cycling in Amsterdam.

Video impression of cycling in Amsterdam

Watching the video below (almost) can’t be skipped, to be prepared for you biking experience in Amsterdam. With many thanks to the Dutch Survival Guide for creation the video below! It provides an impression of what cycling in Amsterdam is. Note: some parts in the video are of course a bit gushy. In addition, it depends where you cycle in Amsterdam. It’s definitely not everywhere in the city very crowded.

Arrange comfortable bikes in Amsterdam with our partner YourCityBike

Funny tutorial how to cycle safe in Amsterdam

So cycling is a big thing in the city of Amsterdam. In fact, it’s the transportation of choice for many inhabitants of the city. The city is well adapted to these amounts of people riding their bikes. For a better understanding of this concept we’ve highlighted some staggering facts concerning biking in Amsterdam;

Please bear in mind to always lock your bike and lock it well! We can’t stress this point enough, no matter what kind of bike; rental or owned or how fast you’ll be back to pick up your bike. With bikes being so popular, so are bike thefts among criminals. Bikes are fairly easy to steal and sell. Therefore, bicycles are a popular quick score amongst sneak thieves, pilferers and junkies. Exact numbers of bike thefts are difficult to calculate; many victims don’t bother filing a stolen bike as it’s such a common practice and chances of getting your bike back are slim. According to the Amsterdam newspaper Parool, based on numbers provided by the police, in 2017 there were 8113 reported bike thefts. On that same year, the Dutch Cyclists’ Union reported that nationwide, only one out of three bike thefts is actually reported to the police. Our expectation is that this percentage in Amsterdam is lower than the nationwide average, somewhere between 25% and 33%. Based on this estimation and the factual information somewhere around 24,339 and 32,452 bikes are stolen every year. Make sure not to become a victim!

Renting a bike in Amsterdam is the fastest way to get around in the city. The entire city has bike lanes that are specifically designed to get safe around in the city. Well known bike stores are Yellow Bike and Mac Bike. There are also a view smaller bike rental shops around the city.

Tips for renting a bike

Amsterdam is Europe most bike friendliest city. Grap this chance, and expand your knowledge of the city, while having the fresh wind in your face.

Book your Amsterdam Highlights Bike Tour for €32,5 at AmsterdamTravelcafe

The following points below, will tell you the advantages of taking a bike tour: 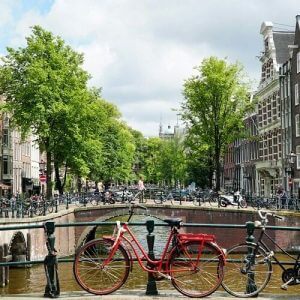 Directions from your current location.

Ridding a bike in Amsterdam is a serieus deal. It can be experienced as hectic. Take a look at the points below to ensure yourself to remain safe. These are the basic rules and the most important things to keep in mind.
Don’t worry be happy! According to research of the local government of Amsterdam 84 % of the people rate cycling in Amsterdam as very enjoyable.

Check out the best cycling in Amsterdam infographic!

Cycling is way better with pretty weather. Via our Amsterdam weather page you find the most accurate and up to date weather.

Combine your cycling experience with other things to do in Amsterdam. Take a look at all the interesting museums, see Amsterdam from the canals and find a proper place to spend the night. Just click on the navigation below:

Discover all museums of Amsterdam. Most of them are open for the entire year

Experience Amsterdam from the water, and make a canal cruise through this romantic city

Find a place to stay in one of the great hotels of Amsterdam. The overview shows you all the different options in prices