Things to do in Amsterdam » Blog » Dutch Food » Dutch Cheese

Have you ever tried cheese that is unique in flavour and very creamy? If you haven’t, you really need to come to Amsterdam and see what real Dutch cheese is all about.

It is for no reason that cheese is one of the Netherland’s most important and popular export products. Dutch cheese can trace its roots back to hundreds of years ago and considering how innovative the Dutch can be, one must put into consideration the fact that the Dutch have had more than a hundred years to perfect the taste of their different kinds of cheese.

Since the Netherlands (and Amsterdam especially) has always had a farmer’s identity, the origins of cheese can be traced to more than a hundred years back. This was even before the Netherlands became a nation. Small city states were usually filled with farming settlements where the production and sale of different kinds of farm products was the main source of income. One of these kind of farm product happens to be cheese and while Amsterdam may not really have a cheese identity of her own, other neighbouring cities actually happen to have a strong identity when it comes to the production of cheese and other dairy products.
Lots of Dutch cheeses we consume today are manufactured in big and modern dairy plants, but at the end of the nineteenth century most Dutch cheeses were still produced on the farm by the dairy farmers who didn’t feel the need to modernise. To these farmers, making cheese the old way was an art form that had to be preserved. They sold their delicious homemade cheeses at Dutch cheese markets, including the very famous cheese market in Alkmaar. Established in 1581, the cheese market in Alkmaar remains ‘the hotspot’ when it comes to sampling some of the finest Dutch cheeses. It is a very popular tourist attraction, especially amongst cheese lovers. 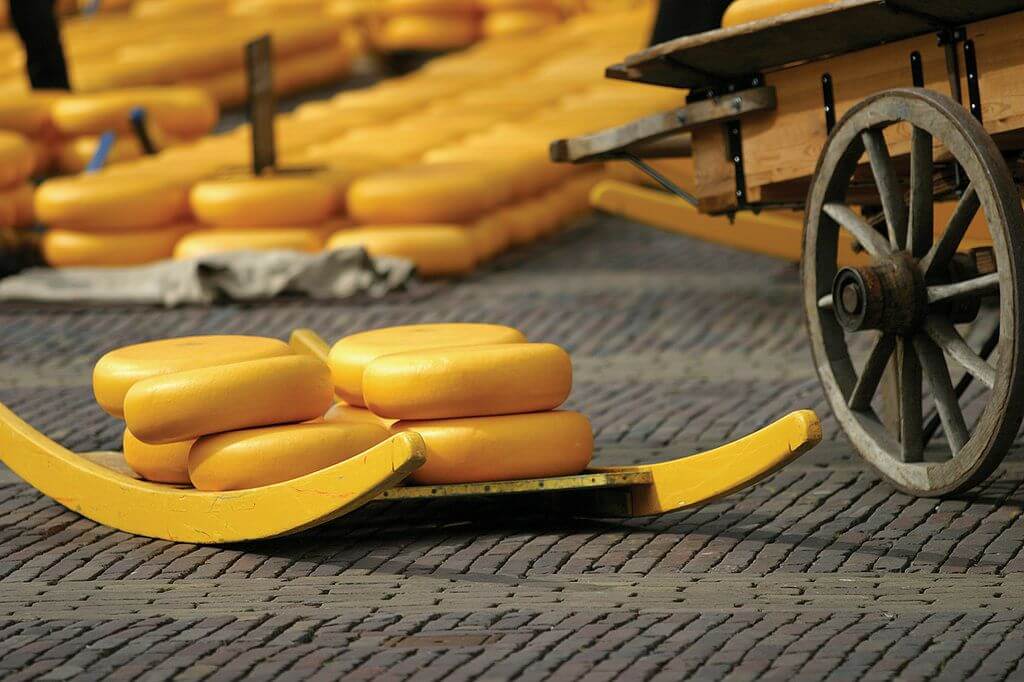 There is a vast variety of Dutch cheeses and to be honest, Gouda and Edam are the most popular of them all. They are named after the towns they were originally made in and sold from.

This is a locally made cheese that is named after the city of Gouda (where it was originally made). It is a yellow kind of cheese made from cow’s milk. It is one of the most popular cheeses worldwide and the name is used today as a general term for a variety of similar cheeses produced in the traditional Dutch way. Gouda cheese has the honour of being one of the world’s oldest cheeses, since the first time it was traded in the Dutch city of Gouda was in 1184. There are 7 different kinds of Gouda cheese categorised by age;

In a country like the Netherlands where cheese and beer culture is a very popular trend, young Gouda cheeses are best enjoyed with any kind of beer (I’d recommend Heineken or Amstel) while medium cheeses taste best when paired with any red and old wine from Italy or France. A well aged Gouda complements wines that are deeply flavoured such as a rich Merlot or Shiraz. For maximum enjoyment, Gouda cheese may be grated, sliced, cubed or melted. Most Dutch people eat it as dessert. I generally love mine old and melted.
Gouda cheese is available in large wheels with each weighing between 10 (4,5 KG) and 25 (11,3KG) pounds.
Other types of Dutch cheese are;

This is probably one of the most popular and best kinds of Gouda cheese. Very old and exquisite, it is made from cow milk, has a firm texture, deep colour and a rich and robust flavour. It is the kind of cheese that immediately serenades the senses as soon as it touches the tongues. Traditionally, Old Amsterdam is kept on wooden shelves for long periods of time to ripen and this is how it forms its typical semi-hard structure, with a deep caramel color. The body of the cheese may contain tiny holes, which are called “eyes.” Crunchy white protein crystals are also known to appear during the ageing process.

Discovered by Lambert Westland at the end of the nineteenth century, Old Amsterdam cheese has gone on from being just all about cheese with creamy taste to a movement in its own right. It is the face of passion and excellence – when it comes to cheese and a family’s gift to the world (in the form of cheese). While the production process may have been modernised, it must be noted that the traditional production techniques are still very much in use. This helps preserve the legacy of Lambert Westland which was passed on to this generation years ago.
Be sure to visit the website if you’re interested in knowing more about Old Amsterdam cheese and where to purchase them all over the world.

Now that you’ve learned so much about Dutch cheese, it’s time to find out about it yourself.  Of course you want to have a taste to see for yourself what the fuzz is all about. The Henri Willig cheese stores are one of the stores that offers cheese tasting sessions. You’ll be welcomed by a hostess in traditional Dutch costume, after a short introduction movie the cheese tasting can begin. The cheese tasting sessions at Henri Willig cost €10,- and include two drinks and of course the cheese you’re about to taste.

Henri Willig’s cheeses have been produced, packaged and delivered in their very own cheese factories all over the Netherlands since 1974. They use traditional cheese-making processes to produce some of the best cheeses. Henri Willig’s cheeses can be bought at their different stores all over Amsterdam and other parts of the Netherlands. Dairy farm, Jacobs Hoeve in Katwoude is where Henri Willig started making cheese over 40 years ago. To this very day, tourists still flock the farm to see how cheese is made and to taste it for themselves. Cheese can also be bought at these cheese farms scattered all over the country.

Take a look at the other things to do in Amsterdam to combine it with your cheese tasting journey.